IHOP’s pancakes on a beach Facebook Live-stream: Brilliant or brutal?

Confession: When I started this post, my intention was to write something that basically undressed IHOP’s recent Facebook Live stunt of pancakes on a beach.

If you haven’t seen it yet, block off an hour-and-a-half and settle in. It’s “must-see” Facebook Live 🙂

In all seriousness, it was a bit of a stunt–very much in line with what Arby’s did a few years ago with its roast beef on a spit for 24 hours (I wrote about it at the time).

And, you could make a good argument that this is the most ridiculous post in the history of Facebook (OK, that might be taking it a little far 🙂

Sure, the concept of pancakes on a beach is, on the surface, ridiculous. I don’t think anyone would argue that.

But, IHOP understands its audience. And that audience is most likely (guess on my part) a younger, more price-conscious audience (read: they spend more time on Facebook than the average yogi). We’re also probably not talking about an MBA-educated audience here. Not taking shots–just stating that IHOP’s audience is younger, more social-savvy, and probably a bit less educated (again, just a guess).

So, pancakes on a beach suddenly makes at least some sense.

And, you can see that in the comments and results.

Believe me, there were a BUNCH more just like this.

Even better: The live feed also engendered comments like this:

So, to recap, IHOP drove thousands of positive comments through the stream, and many “leads” (i.e., people wanting to go to IHOP immediately to consume massive amounts of pancakes). I think by most brand social standards, we would have to qualify that Facebook Live stream as a smashing success.

But, upon further review, IHOP did much more than just post pancakes on a beach. Here are three things I thought they did brilliantly in this Facebook Live execution:

Instead of one long feed, they posted three times during the day

Smart for a couple reasons: 1) It gave the IHOP crew small windows of time to reset and adjust to audience feedback. See below. Some of that they probably did on the fly. But, it would also be nice to have a quick, 10-minute break to reset and make adjustments. Especially since the alternative is a 5-hour-straight live feed. 2) It gave the IHOP crew multiple opportunities to target the post to different audiences. Don’t know for sure if they amplified these, but if they did, making three posts (instead of one) gave them the chance to target three different audiences (great testing field). 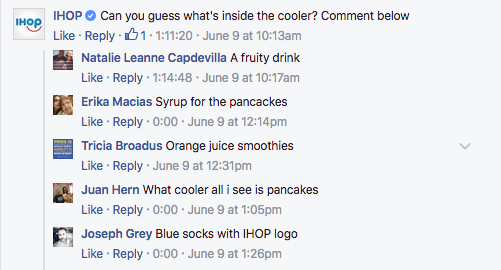 Since these live streams went on for hours, IHOP had to find ways to keep the discussion thread going. So, every so often, they’d bop in and ask a question to provoke the audience. The key was linking it to exactly what people were seeing on the feed.

They listened to their audience–and adjusted on the fly

If you watch the feed, you’ll notice a guy with a beard enters the picture and eats the pancakes. This was a huge turn of events for those taking time to watch the feed. So big, in fact, he earned an internet nickname: #beardguy. Which actually became kind of a big deal. So big, in fact, that IHOP saw what was happening in the stream, and adjusted (I’m guessing) on the fly with comments like this.

Seems like basic community management to listen to your audience and adjust with them. But, you might be surprised how many brands don’t do this well. IHOP, on the other hand, excelled here. In fact, they brought back #beardguy in a post of his own a week later (great way to extend the campaign!). 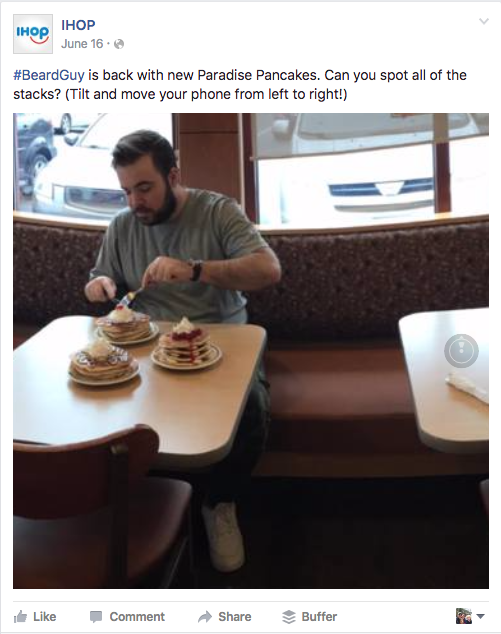