Home Blog Online marketing strategy|Trends I was going to write a post ripping the current state of influencer marketing, but I wrote this instead

I was going to write a post ripping the current state of influencer marketing, but I wrote this instead

You know one easy way you can tell if an internet, social media or tech trend has “jumped the shark?”

I’m half-kidding. Just watch this 60 Minutes segment on “social media influencers” and try not to laugh. No really–if you can make it all 12 minutes and not laugh I’ll give you $100.

60 Minutes jokes aside, influencer marketing has become big business. Too big, according to many.

I mean, just look at this graphic. Influencers with 7M+ fans are getting up to $300,000 per post on YouTube. 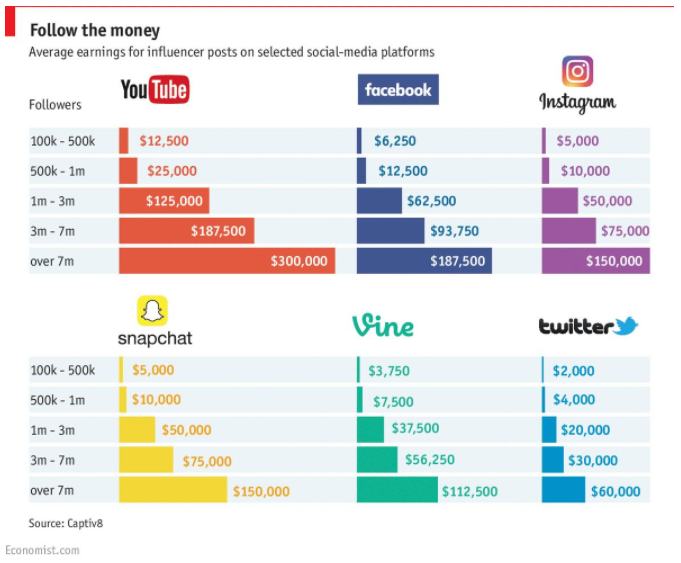 25-year-old influencers are saying things like “I could retire now”.

When I started researching this post, I was planning to write about how I think influencer marketing may be reaching a critical tipping point from a brand perspective and how it’s about to jump the shark.

About how utterly ridiculous it has become.

About how proposterous it is that a Vine influencer would say “I could retire right now” to a 60 Minutes reporter.

But then something funny happened–I started to come around (at least from a brand perspective).

But, the four myths I was hoping to debunk actually turned out to be true. Let’s take a closer look:

Let me throw a few numbers at you.

Now, most of those numbers above are fluid, but they give you some context. And the context is pretty simple–from an advertising/awareness POV, influencer marketing is in the ballpark cost-wise when stacked up against competing “ad products” (because really, that’s what influencer marketing is). Depending on the situation, you could probably say it is “cost effective.”

Myth #2: Social influencers have the trust of their audiences.

I was hoping to debunk this one based on my theory than many influencers have sold out. Their feeds are full of sponsored posts (many of which aren’t disclaimed, by the way). But, as I researched more, I thought about the Edelman Trust Barometer. The 2016 version found the following the most trustworthy:

People like me was above: CEOs, employees, and government officials (go figure). Sure, the Edelman Trust Barometer isn’t the final word on trust, but those numbers say a lot. People do trust influencers (well, at least some of them).

I was ready to take this one apart from this perspective: Brand advertising allows companies to control the message. To develop their own creative. Influencer marketing, on the other hand, is (largely) out of their control. Sure, brands have input when working with influencers. But, one of the primary reasons brands DO work with influencers is because they want to tap into their creative know-how. Into their tastemaking ability. That involves handing the creative reigns over to the influencer.

Doesn’t that sum up influencer marketing pretty well? These influencers will help you define your brand. I think that’s still a scary place for many brands, but for the ones willing to jump in feet first, I think it tends to work pretty well because that’s exactly the kind of thing that attracts the younger set.

Myth #4: Social influencers are worth every penny.

One of the many quotes from the 60 Minutes piece that made me spit up my coffee was this: “I’m actually under-paid.” Yep, the influencer who’s making $150,000 per 6-second Vine actually said that on national TV. Please allow me to poke this pencil through my eyeball.

But, in the right spots, I (sadly) believe he’s right. Here’s why. Whether I want to believe it or not, these (mostly younger) influencers are the Millennial and Gen Z equivalent of my generation’s rock stars. And, if we’re going to compare them to rock stars, let’s compare them to rock stars. For example, Beyonce. Yeah, the Beyonce who signed a 10-year, $50 million deal with Pepsi in 2012. That’s a lot of zeroes. And, we don’t know all the specifics of the deal (just like we don’t know the specifics of these influencer deals). But, here’s the difference (besides all the zeroes): these influencers are creating original, creative content on behalf of brands. I (along with many others) might think it’s ridiculous content–but the fact remains it resonates with its key audience (and I’m not in that key audience). So, think about the $50M Pepsi spent on Beyonce. How much do you think they also spent on ad creative to go with that sponsorship? Don’t you get almost a 2-of-1 with social influencers? I think the math works in your favor.

So, despite my best intentions to destroy the influencer marketing industry, I’ve convinced myself that paying a YouTube star $300,000 for 5 hours of work may actually worth it for many brands.

Now, if you’ll excuse me, I need to start Googling “How to become an overnight YouTube Influencer sensation.”