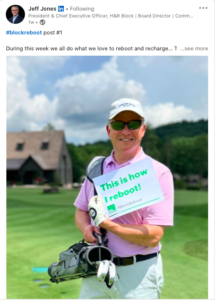 This is part of a program I believe Block has been doing for a few years now. The idea: To give employees a paid week off in July, on the heels of yet another busy tax season.

Pretty good idea–and especially timely and relevant this year as the war for talent rages on, and there is a keen focus on mental health and burnout in the workplace.

But, Block took this program to a new level this year with a social execution that was simple, but brilliant.

The idea was pretty simple really–give employees a sign that reads “This is how I reboot” and ask them to use it in a post that talks about how they used their paid week off to recharge and refresh.

Again–not groundbreaking, but simple and brilliant.

The larger strategy behind the idea is also smart: To take advantage of personal profiles vs. the corporate profile to drive interest in H&R Block as an employer-of-choice.

Case in point: Block’s wrap-up post talking about the program generated 160 likes and 5 comments. Meanwhile, I noticed numerous posts following the #blockreboot hash tag than had more than 200 likes/comments. Some had more than 500!

Not sure how the final numbers will wash out, but if you search #blockreboot on LinkedIn you’ll find a steady stream of people posting about their paid week off. This isn’t just a handful of people participating, as is usually the case with programs like this. I’m talking about hundreds of Block employees posting on LinkedIn.

More importantly, the personal posts really dive into how people used their time off, and their appreciation to Block for the full week off.

I have to believe this has been an Employer Brand home run for Block.

Just look through the comments on some of CEO Jeff Jones posts. Yeah, he was leading the charge, posting multiple times about how he, too, was using the week to recharge and refresh. Leading by example. So simple–but so smart.

Among the comments I noticed:

“Thank you, Jeff. This was a real cool week for all associates at H&R Block. Thanks to the entire H&R Block leadership team for making this happen!”

“Love the Block Reboot. Great engagement and way to honor employees and their efforts towards driving great outcomes. Give them time to reboot. Well done!”

“Everyone that I connected this week are in total joy and happiness. Thanks to H&R Block!”

In fact, it was pretty tough to find a single negative comment on any of the Block employee posts. That’s a huge win in the era of negativity on social. You can’t talk about much of anything these days without being lit up by the internet mob. But, Block’s #Reboot program seems to have threaded the needle.

Now, will this program work this well every year? Maybe. Maybe not. I have a feeling they hit the perfect timing this year with burnout at an all-time high. But, I’ll be following along to see if they give this a try again next year–and to see if the results are the same. Because this year, the results were pretty damn good.