Sometimes, it kinda feels like we’re still living in 1995 as PR counselors. Doesn’t it?

Consider this chart for a moment: 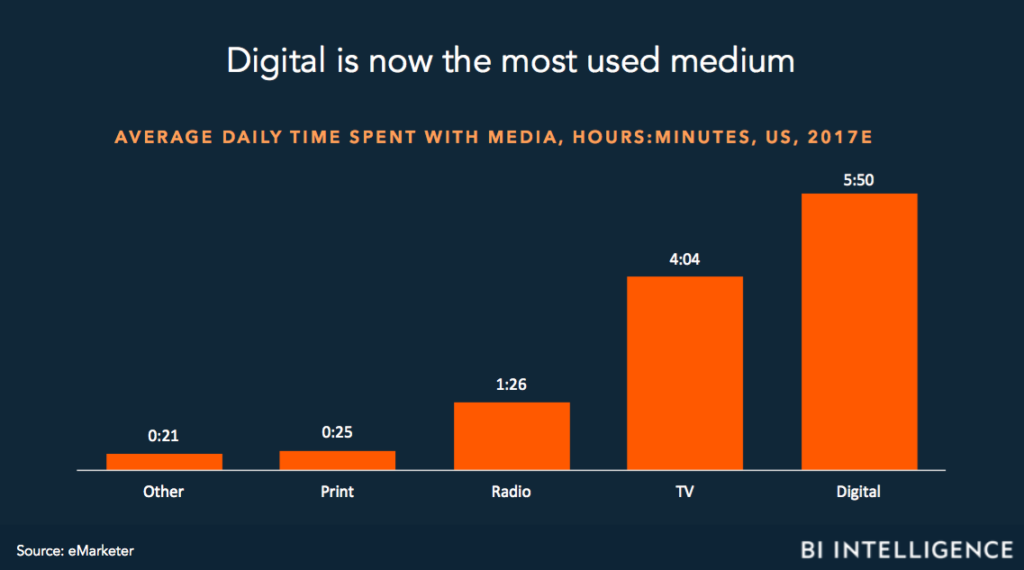 Americans now spend a whopping 5 hours and 50 minutes with digital media on any given day.

And just 25 minutes on print media.

Think about that for a minute.

And remind me again how important that hit in USA Today print edition is again.

Consider another stat: According to researchers at the Notre Dame University (yeah, that one), 73 percent of posts on Reddit are voted on by users that haven’t actually clicked through to view the content being rated.

According to Columbia University and the French National Institute, 59 percent of links shared on Twitter have never actually been clicked.

Or, what about this one: U.S. adults spend an average of 1 hour, 16 minutes each day watching video on digital devices?

What do these stats tell us? PEOPLE ARE NOT READING ON THE INTERNET! (I know, alert the media, right?)

At least not beyond the headline. Which, really, should come as no surprise given today’s average attention span.

So, we know people are spending FAR more time on digital media (and video) than they are on print. And, we know most people who are consuming that digital media are probably just scanning and reading headlines (if that).

Meanwhile, what are public relations folks spending much of their time producing?

Huh. But doesn’t most of this data we’re seeing imply that our customers and targets want to consume: videos, photos, infographics and short messages (via private messaging apps)?

But, here’s the disconnect: We’re spending an inordinate amount of time creating content that our audience is telling us (maybe not directly, but still) they do not want.

What’s behind it? Two big reasons come to mind:

That said, I think a couple things are going to happen in the next few years:

1: The shift to video is going to course-correct a bit. Tons of publishers and companies are pouring millions of dollars into producing more video in 2018. But, that’s going to completely overwhelm the average social media user. Soon, people will be on social video overload and they’ll be begging for a break.

2: Text is going to make a bit of a comeback. You’re already starting to see this on visual-first platforms like Instagram. Some of the more engaging local influencers here in Minneapolis thrive on making posts on Instagram that are at least 100-plus words (take a peek at Erin Good’s page for a good example). That’s not happening by accident. As we weed out the internet chaff, trusted sources will have much more leeway to create and share longer-form text content that will get read.

That’s my two cents. What do you think? Is how we’re creating social content today really lining up with how people want to consume it?