How the biggest company in America–Walmart–breaks news in 2015

In case you’ve been living under a rock, you probably heard the big news out of Bentonville last week: Walmart is set to increase its minimum wage for associates.

Big news, right? HUGE news is more like it. So, given the fact that I am a PR counselor by trade, and Walmart has been a client of mine in the past, I was more than a little interested to see how they broke the news.

What I discovered was really pretty interesting–and may change the way you think about breaking news yourself with your clients and organizations.

I’m not the first to write about this–Patrick Coffee at PR Newser noticed last week, too.

And, after digging in a bit more, I thought there were some interesting lessons to learn from the way in which Walmart broke this news.

Most notably, the integrated nature of the way Walmart broke the news. They used a variety of tactics from owned to earned to paid media that no doubt involved many different groups and departments from within the Bentonville company.

First, they shared a news release with specific journalists (as noted, by Coffee, in the PR Newser article). 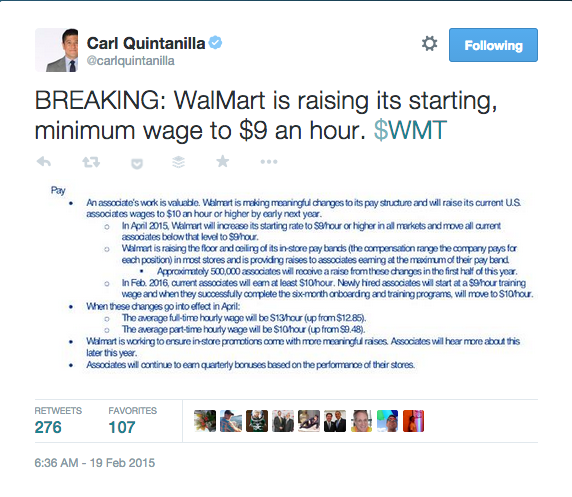 So, no big surprise here. On point with what most companies would do, no question. At least, most larger companies.

Next, they established an online “home base” for the news–one that was interactive, and open to two-way conversations with employees, customers and stakeholders: The Walmart blog (see below). 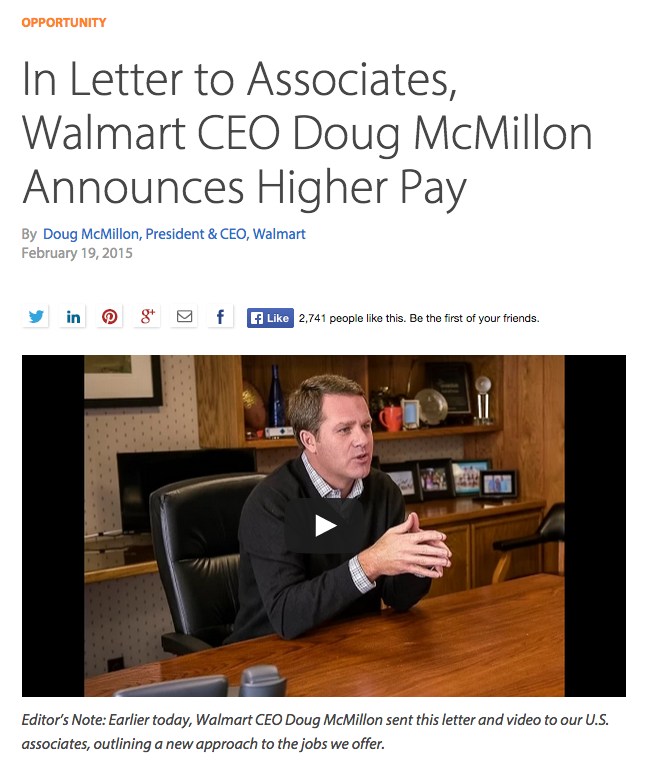 Why is that smart? Because now the “release” (post) becomes portable to use in different social media channels. And, it becomes more interactive. Note the Walmart folks featured the video of Doug McMillon (we’ll get to that in a moment) right at the top of the post. We know people (and media) love video–let’s make sure everyone sees it right at the top (and has the ability to embed it in their stories and posts across the web).

They also plugged in a large infographic (we’ll also talk about that in a moment as well)–another nice visual piece that helps explain the decision from a few different angles. And finally, they opened up the comments on the post–something a garden-variety news release wouldn’t have. And, as you can see, they were actively responding to folks (and the comments weren’t all positive, either, as you might expect). 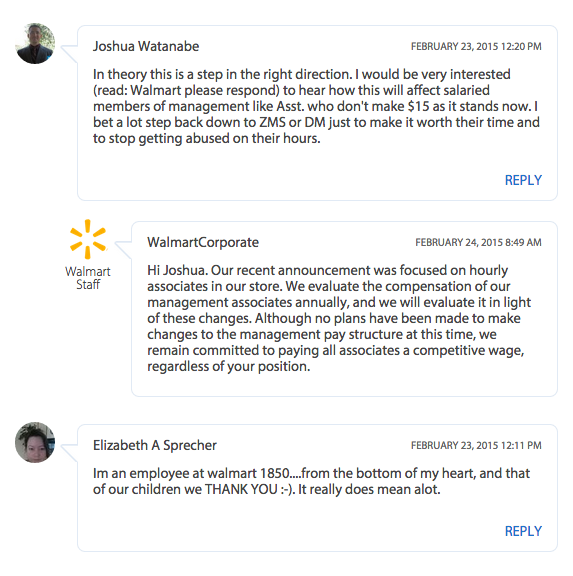 And finally, using a blog for this news made sense because I think it “humanized” Walmart and the news a bit more. After all, this was a very people-focused topic, right? Walmart wanted this news to come off in a warm, more welcoming way (enter Doug McMillon video). I think using a blog for the home base accomplished that more than a tried-and-true news release would have (at least publicly). 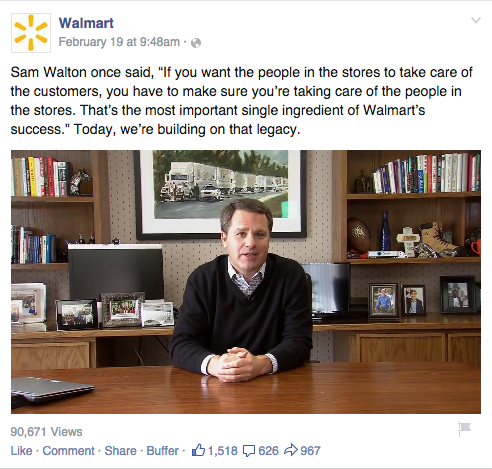 Note the context and text they used in the post–different from what they used across other social channels. So, here’s one lesson: Use different language, depending on the media (probably well-known by now, but worth mentioning).

They also shared on Twitter, specifically from their flagship @walmart and @walmartnewsroom accounts: 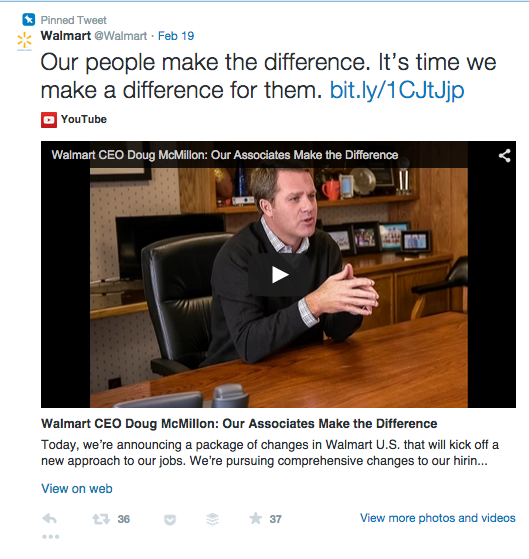 Couple things to note here. Again note the language–different from what they used on Facebook. Shorter, more “retweetable.” But also notice they pinned the tweet to the top of their timeline. Simple, but smart. Also–notice how Walmart strategically retweeted some of the bigger Twitter players who shared the news throughout the day. Not everyone–just the heavy hitters. Again, simple but smart. 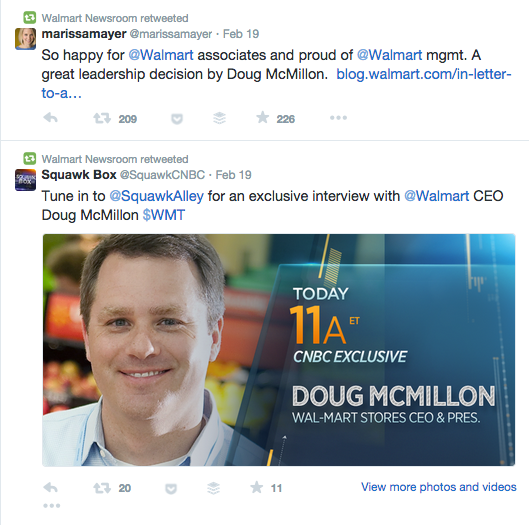 Walmart also did a very smart thing with Twitter–something I’ve been talking about for the last couple years. They took the larger piece of content (the infographic–full form on the blog post) and broke it down into smaller “chunks” they then used in individual tweets. Like this one: 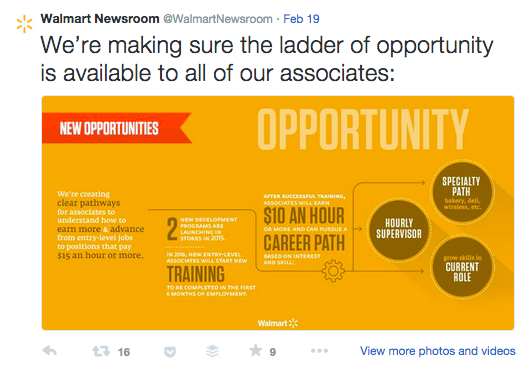 For context, here’s what the full infographic looked like:

Walmart went on to share three more tweets–all using different “chunks” of the same infographic. Great job extending the lifecycle of that one piece of visual content on the blog!

And, then I noticed this tweet in my feed yesterday. It seems that Walmart used promoted tweets to make sure the news showed up in people’s timelines. Interesting. Now this is part of the integrated approach to how Walmart broke the news. It wasn’t all about “earned media”–Walmart used the owned/earned/paid triangle to distribute and promote the news. 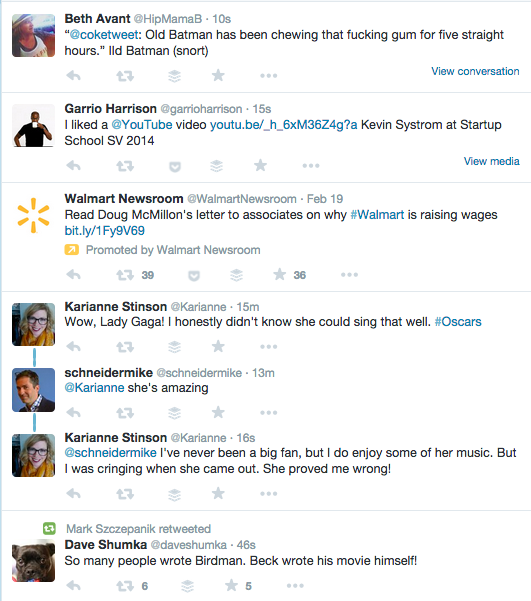 But, they didn’t stop there. A simple Google search and this showed up. 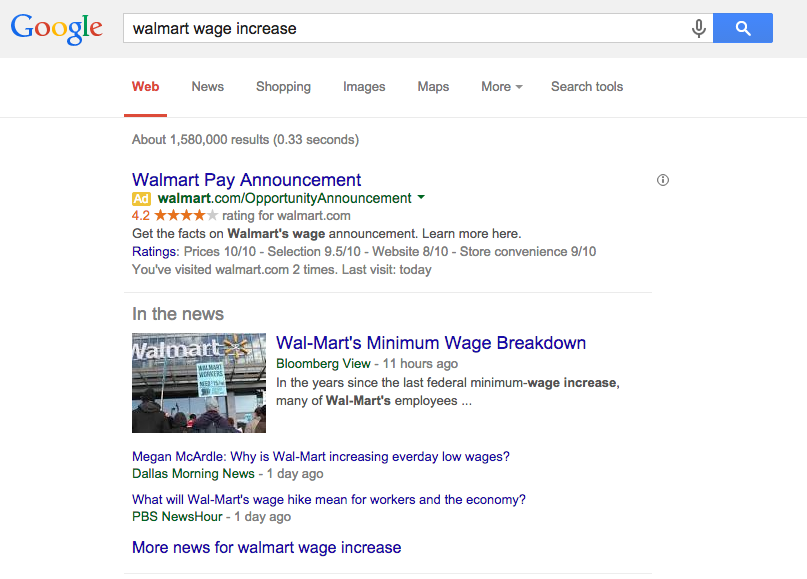 Interesting, right? Here’s Walmart using paid search dollars to make sure the news pops up at the top of the page for key search terms. The link takes you back to the Walmart blog post with the announcement details, video and infographic. So again, we’re back to the integrated approach of using paid/earned/owned. I also think about what this means for the Walmart PR team–guessing they aren’t in charge of SEO and search at Walmart. That means, they had to work hand-in-hand with the marketing team on this. Sounds simple, but if you’ve worked for or with a big company, you know these types of things don’t always just happen as seamlessly as you think they should. And, certain departments (even though they may be separated by just a few feet or hallways, don’t always communicate), don’t always communicate well.

Walmart even teased the Doug McMillon video on Instagram. 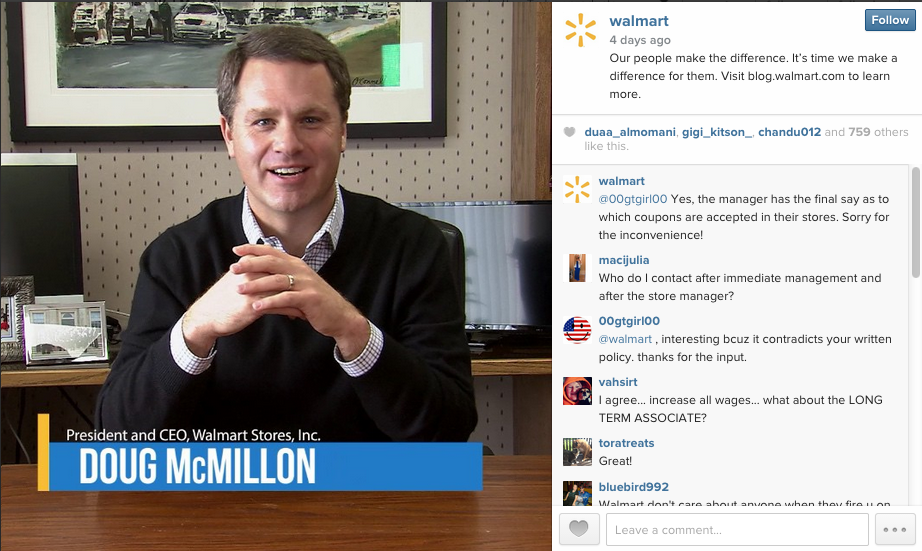 Keep in mind, Walmart has more than 86,000 followers on Instagram, so while this is most likely a “secondary” channel for them, it’s still substantial. And, the post did receive more than the average number of comments–in fact, the only post recently that drummed up more engagement was the post alerting customers that Walmart was now selling Oreo Red Velvet cookies!

All in all, a very interesting approach to breaking news by Walmart here. Sure, not every organization has access to the resources the biggest company in America does. But, I would argue many of these tactics and approaches could easily be executed by virtually any company. Walmart probably invested more in the paid piece of the execution, but if you’re a small or mid-sized business, you wouldn’t have to spend a ton on Google search ads or Twitter promoted tweets to achieve a similar effect.

Something to chew on as the way in which we share and break news as an industry continues to evolve.

How the biggest company in America–Walmart–breaks news in 2015