Home Blog Blogging|Case Studies How I grew my blog readership 659% in just 3 years (and how you can, too)

I started blogging in December 2008. At the time I was working for Fairview, the second-largest health care system in Minnesota. At the time, I wasn’t working in digital marketing–I was in a more traditional corporate communications role. But, I was experimenting with blogging. And, I loved to write. Blogging was a natural fit for me.

At first, views and followers were tough to come by. I remember those first few posts. Very few eyeballs. For anyone who’s blogged, this should sound familiar. We all start at zero.

But, as time went on, I learned a few things. I learned what people wanted to read about. I learned a few strategies for attracting new readers. And, I was consistent in my blogging (2-3 posts a week–probably the most important recipe for long-term success). In about a year, I had built up a bit of a readership. See below–almost 3,000 visits as of April 2010 (about a year-and-change into my blogging journey).

But something changed in 2009–I started my business. So suddenly, my blog took on a whole new meaning. It was now my de facto web presence. I wasn’t going to create a web site–why would I? I already had this blog. So, I started to think about my blog a bit differently. It became a new business tool (and I started to invest even more time there). And, as a result, readership grew again. This time, hopping up to nearly 11,000 visitors.

For the next year, things plateued a bit. But, I still gained a few new visitors in the following year.

That’s a whopping 659 percent growth in just three years of blogging. If you read this blog with any regularity, you know I don’t toot my horn all that often, but this is one of those accomplishments I’m very proud of.

Blogging is hard work. Ask anyone. I’ve made a lot of sacrifices to make this blog a success. But, it’s paid off for me time and time again. In terms of business leads, meeting new people, speaking opportunities. You name it. Blogging has been invaluable to my business–and my life.

I’m not sure I have all the answers–I’m no @ProBlogger, after all. But I can share with you some of what I believe have been some of the key factors in my blog’s rise to 22,000-plus visitors per month.

What would I want to read about?

To a large extent, my target market for my blog is, well, me. So, as I brainstorm many posts I put myself through the “what would I want to read about?” paces. This forces me to think more critically in terms of topics. And it forces me outside the typical “digital churn” that so many bloggers turn out day after day. For example, I wasn’t seeing a lot about the recent Facebook changes earlier this year–and wanted to know more about them. And out came the following post:

Tip: Simply ask yourself “What would I want to read about?” if you were a target reader of your blog. Asking yourself that question will lead to many productive posts. 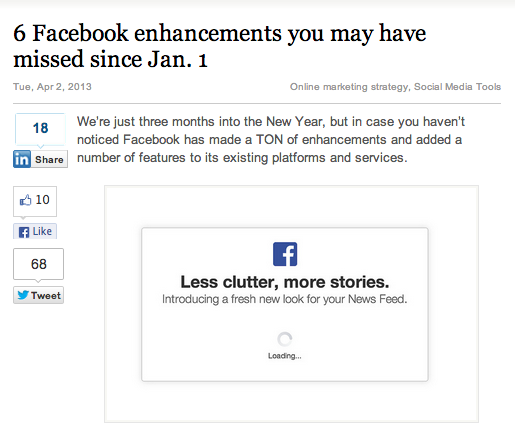 Focus on posts people will bookmark (and link to)

One of my most popular posts for the last six months has been my “Instagram cheat sheet” post I made on Dec. 11, 2012. My original goal with this post: To create a resource for the community that would get links–and get bookmarked. All of which would help drive search traffic, which has proven to be true. In April, this post had 2,318 page views (my top post). In March, it had 3,493 page views (my second most popular). And in February it had 4,098 (again, my most popular). It continues to drive search traffic every day to my blog–while I do nothing at all. Beautiful.

Tip: Think about content you can contribute that could be a resource for your readers–then think about how to organize it in a blog post. 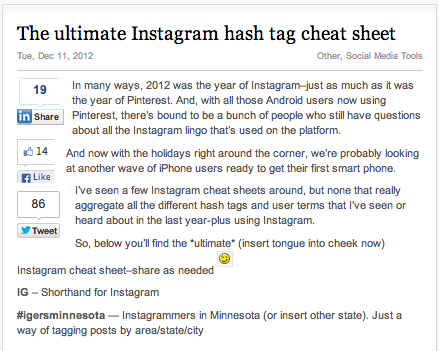 Spotlight the community (but find the right members)

Early on in my blogging I started a series I’ve continued to this day: The PR Rock Stars series. The goal? To shine the spotlight on some of the true pros pros in our business. My secondary goal? To build a community around this blog that will attract more readers over time. Over the years, I’ve featured 30-plus rock stars as part of this blog. That’s led to an increase in readership since every time I share one of these posts, the rock star inevitably shares it, as do many other people who know the person. And, I typically open up a door to either cement an existing relationship with the rock star–or build a new one, if I don’t know the person all that well (it’s even led to a couple client engagements). And, the best part? It takes less of my time since their answers provide most of the content. But the real trick is to highlight the right people. Sure, I wanted to shine the spotlight on people doing great work. But I also wanted to shine the spotlight on those doing great work who were also active online. There is a difference.

Tip: Don’t just profile any community member–target the ones with larger social followings (or least a sizable following–you don’t have to target the A-listers in your industry). 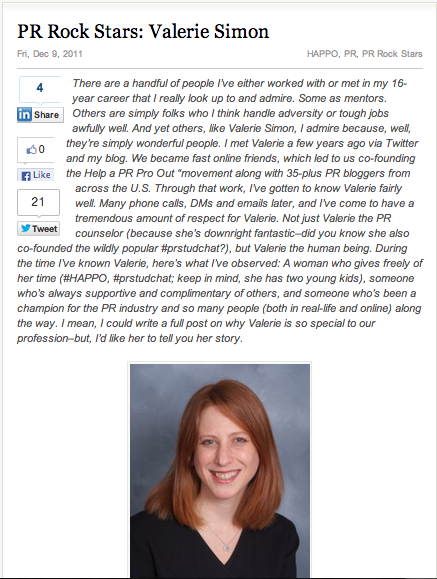 Write about topics no one else is writing about

In 2010, I wrote a post about how to create knock-your-socks-off presentations using Prezi, a then-new tool in the mix. At that time, few people were blogging about Prezi. I knew that because I did a few simple searches–and anecdotally, I didn’t see many PR/marketing bloggers talking about it. Plus, I was actively using the tool so I had some experience with it. I thought a post on Prezi would be an easy way to rank for a key search term many in my industry might use. I was right. From Jan. 1-May 10, the Prezi post was still my fifth most popular post in 2013–a post I had written THREE years before. That’s the power of writing about a topic no one else is writing about.

Topic: Do searches for keywords around topics you think no one else is writing about to confirm your suspicions. 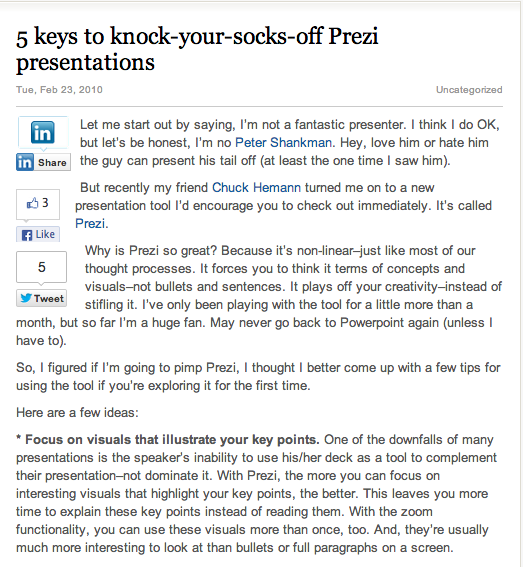 List posts. They’re a dime a dozen on the Web. Literally. People say they’re tired of list posts. Yet, the good list posts still work. Case in point: This post I wrote about 15 up-and-coming PR pros to watch in March of 2012. Check out the share numbers–97 retweets, 62 likes and 52 LinkedIn shares. Those are pretty solid sharing numbers for a post on my blog. And, I saw that traction because it wasn’t your garden-variety list post. It wasn’t a list of the “top 20 social media gurus” (which has been done to death by now). It was a list of up-and-coming pros. I didn’t see too many lists like that when I did my research. Plus, the other upside: These were people who don’t usually receive a lot of online accolades, so I had a hunch they’d be more apt to share (unlike the “gurus” like Solis, Brogan, etc. who are recognized day-in and day-out). No, these folks would help drive traffic to the blog. And so would their friends, colleagues and family members. 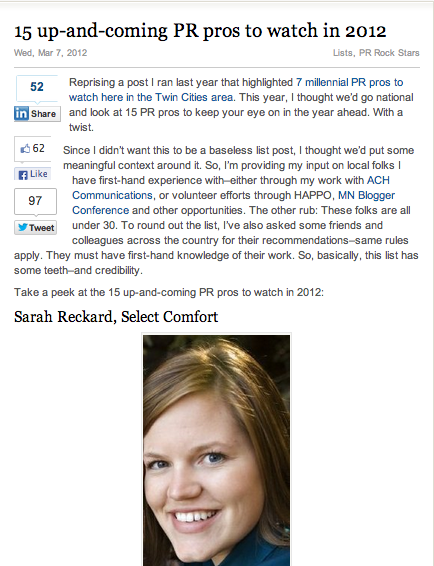 Write about what’s on your mind

One of the smartest decisions I’ve made about how I use my blog has been not to overthink it. Ever since my blog became my de facto business site, there has been a perceived need to use it purely as a new business tool. I remember one friend who once told me: “If you’re blogging about anything other than services and tools you offer as a business, you’re doing it wrong.” I listened to that advice, but promptly dismissed it. Why? Because I believe when people hire me, they hire ME as much as they hire me for my skills. Sure, I post plenty about topics I have services around (social audits, content strategy, marketing strategy, etc.). But, I also post a lot about topics that merely interest me. Or, items I read about in the paper (I recently blogged about the Target CMO, who was featured in a Star Tribune piece recently). Or, just things my family and I are dealing with (like how we cut the cable cord last year–which, incidentally led to a piece on KARE-11 featuring our family; see below). So, I try to post a couple times a month about things that may not even relate to digital marketing, but posts that tell readers a little more about me as a person.

Tip: Don’t be afraid to get personal on your blog. Remember, blogging is a way humans connect with one another. Even if you’re working for a large company. 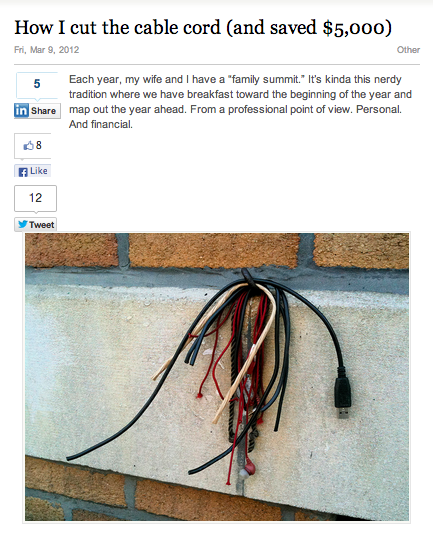