Home Blog Uncategorized Growing my blog has been all about…

Growing my blog has been all about…

Last Saturday, I had the great honor to keynote the eighth Minnesota Blogger Conference. I say “great honor” because this is an event I co-founded with Missy Voronyak years ago. From our first, small event in CoCo St. Paul, I don’t think either one of us could have imagined it would be around today years later–let alone be bigger and so much better than when we first started. 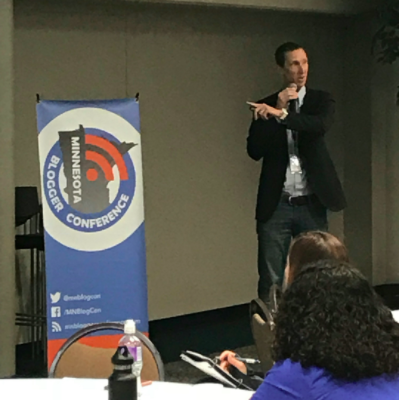 Over the last eight years, I’ve written more than 1,100 blog posts. During that same time, I’m guessing I have probably met with almost 1,100 people for coffee. During those coffee meet-ups, I’ve: learned best practices, shared job search strategies, talked about kids, discussed job changes, talked about social media trends, and much, much more. In fact, just recently, I was introduced to a woman who runs social media at the University of St. Thomas. We talked about the recent Tommie/Johnnie football game (I’ll be blogging about that soon) and her role in covering the game for her employer/school. It was just one of many, many wonderful coffee meet-ups I’ve had just this year due to my blog. Another example: My PR Rock Star series. It has given me the opportunity to interview 100+ PR and social media marketing professionals across the U.S. over the last eight years. Some of these rock stars have gone on to be good friends of mine. Others have gone on to be clients. Yet others have become partners or professors in our new sparked social media training. Point is: My blog has given me the platform to meet HUNDREDS of new people over the last eight years. And many of those people have enriched my life beyond what they will ever know.

Here’s a story I never tire of telling. Eight years ago, when the job market was much tighter, I met one guy from Charlotte (Scott Hepburn) and another from Columbus (Sonny Gill). They were both looking for jobs. And, I was tired of telling people I would help–and then never doing anything about it. So, I made a pledge: I would do SOMETHING to help these two guys. So, I organized a tweet-a-thon designed to help connect these guys to hiring managers, potential positions and other resources across the country. The tweet-a-thon was a big success. And even though it didn’t lead directly to a job for either guy, it buoyed their spirits and both claimed it helped spur them to that next, eventual, job. Mission accomplished! I had used my blog to help two guys find a job. I felt great. End of story, right? Wrong. One week later, I get a call from Scott asking if I still wanted to attend BlogPotomac (a popular social media event in DC at the time). Scott and Sonny had talked to the folks at Southwest Airlines and gotten me a ticket. And, they had ponied up the money for my hotel room. All I had to do was buy the ticket to BlogPotomac. It was, and remains to this day, one of the most thoughtful things anyone (professionally) has done for me. I tell this story because it illustrates perfectly what blogging, for me, has been all about. Passion–and people.

People start blogs for one reason: creative expression. Sure, some may tell you they’re starting a blog to make money, but the reality is most folks do it because they want/need an outlet. There’s no doubt that’s why I started this blog eight years ago in 2009. And since then I’ve realized so much personal fulfillment my cup runneth over. One example: Writing this post four-plus years ago about how the Sons of Anarchy lived by the PRSA code of ethics. Fun post to write. And that, in and of itself, was personally fulfilling. But, the big payoff was when SOA creator, writer and director, Kurt Sutter, tweeted my post a few days later! Not a huge deal in the grand scheme of things. And, truth be told, no one really cared, except for me. But, I DID care. I cared a lot. It was one of those small, geeky moments you really only understand if you’re a blogger. That’s personal fulfillment. And it’s a big part of why I still blog.

Want to see my full deck from #mnblogcon last Saturday? Find it below:

Growing your blog is all about… from Arik Hanson