Gary V: Most hated or most loved person in social media?

Gary V is a fascinating personality to me. For so many reasons. But mostly because of his position in the industry–he’s become one of THE lightning rods in our social media marketing world.

People either absolutely LOVE him and share his quotes and content. Or, they really, really, really hate him and all he represents (including his love the NY Jets!).

So, why is that? Why is Gary V such a lovable or hateable personality? I’d like to examine that for a moment today.

First, let’s take a closer look at those who love him. Why the adulation? There are a few clear reasons: 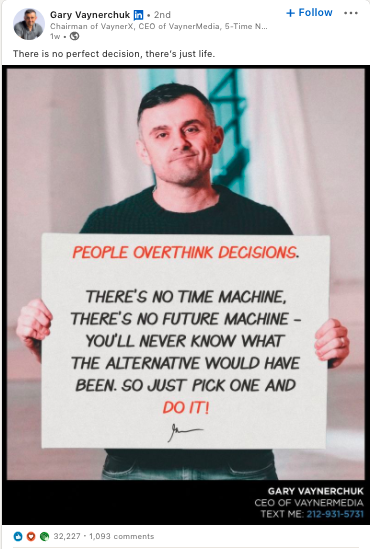 A big part of Gary’s persona online centers on inspiration. “You can do this.” “No one can stop you.” “Follow your dreams!” He espouses inspirational messages like these routinely on all his social networks–and people eat it up. Especially in 2020 and 2021, we’ve needed inspiration more than ever. And Gary V continues to dole it out regularly.

Remember when we went to conferences to hear keynote speakers? Well, Gary V was one of THE keynote speakers. He’s irreverent. He’s dynamic. And, he swears a lot. And, people are drawn to him. I’ve seen Gary multiple times early in his social media career when I was helping with a conference called BlogWorld. And, it was the same back then–some people hated him. But, a lot of people LOVED him. And, back then at least, it had a lot to do with his stage presence.

Gary V has built an empire–literally. In 2015, his VaynerMedia agency was named one of AdAge’s A-List agencies and has more than 600 employees. That year it grossed $100 million in revenue. A pretty amazing feat. He also took over his father’s wine business in the late 1990s and was among the first to digitize the wine business with his Wine Library TV concept which helped him grow the business from $3 million a year to $60 million a year by 2003. So yeah, he had a little help early, but man he parlayed that into some serious financial success over the last 20 years.

Some pretty solid reasons why people love him, right? Now, why do people hate the guy? Let’s take a closer peek.

I could have easily put this on the love list above because it is, in a way, why people love him, too. But, he’s drawn a lot of fire over the years for championing this “hustle culture” attitude. And after a year where we all spent more time reflecting, with family and decidedly “not hustling”, this message has not exactly aged well in the minds of some folks.

His dynamic speaking style is why so many people love him. But at the same time, that style is typically littered with “f-bombs” and other vulgarities that completely turn people off. Again, I’ve heard the guy speak numerous times. Back in the early 2010s, it was kinda his thing. But, as he became more successful, I wondered why he was still doing it. He doesn’t need to now. Personally, I tend to think the over-swearing thing is just dumb. He’s a very successful business person now–he just doesn’t need to do that anymore. I know this bothers a lot of people.

They just do. And, who’s more successful than Gary V in social media circles? Not too many. So, he’s an easy target for those craving success but just can’t get there. I really do think this is a bigger piece of the hate than many want to admit.

4 – Does he really know what he’s doing?

In social media circles, this is a legit question I think pops up a lot among people who have been career communicators and marketers. I mean, the guy was a wine guy. And yeah, he built Wine Library TV on social video. And yeah, he was an early adopter and got all those speaking roles on the social media speakers circuit. But, does that really mean he knows what he’s doing when it comes to brands and social media? See also: His VaynerMedia is the agency behind Planters recent Super Bowl social media approaches, which have drawn criticism over the last two years. And, more recently, he was a part of the Clubhouse kerfuffle with Kool-Aid man that drew the ire of the Clubhouse elite. So, the question persists: Yes, he’s built a super-successful agency, but does HE really know what he’s doing with brand social media? The jury may still be out, believe it or not.