For brands sharing “We stand with Ukraine” messages on social, execution matters

For the last week-plus, many companies have come out with messages of support of the Ukraine, as Russia continues to invade the country. Some of those messages have merely been symbols of support–and others have involved halting operations in Russia.

However, as I’ve been watching these statements and studying them carefully (we just talked about this in class at the University of St. Thomas), one thing has occurred to me: execution matters.

Companies are clearly putting a lot of time, thought and effort into the language of these social media posts. But, it seems those same companies are all over the board when it comes to HOW they make these posts on social media channels.

Let’s look at Unilever, for example. Here’s the tweet they made on March 8:

Read our full statement on the war in Ukraine: https://t.co/M92THlp4Lk pic.twitter.com/roc6hpsSYn

They posted essentially the same thing, in the same way, on LinkedIn:

Coca-Cola simplified it’s message a bit more on social, opting instead to drive people to its site for the full, longer statement:

Adidas took a similar approach on LinkedIn–but note the use of visuals here and how the post appears in the feed: 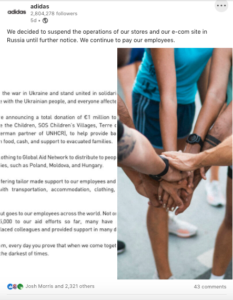 And finally, McDonald’s took an interesting approach in using its CEO’s profile to share the message–then re-sharing that message from the corporate account. 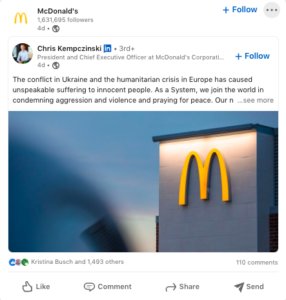 And these are just a few of the examples I’ve seen. But, they’re reflective of the majority of what brands are doing with these posts.

Another wrinkle: I think it’s interesting that most brands are sharing their statements on one of two channels: LinkedIn and Twitter. I found virtually nothing on Instagram or Facebook (and I didn’t even bother checking TikTok). What’s more, many brands shared the message from their corporate accounts vs. their brand accounts (which typically have many more followers).

The outcome of this: Younger audiences may not be seeing the statements. Not if they’re not making them on TikTok, and Insta, or even YouTube and Snapchat.

Back to execution. What intrigues me most about the execution of these statements is when companies put the text in the visual–as many of them did above. What’s wrong with that, you say? Could you even read that text if you were looking at it on your phone? Probably not. Why not just use text space for the text and use some kind of generic, but branded, visual for the photo?

I also think with big statements like these, a message from the CEO feels right. I like what McDonald’s did with its statement. The message came from the CEO’s account, but was re-shared by the McD’s account. And, they used that branded visual I mentioned above. To me, this was an ideal execution for Mickey Ds.

My point in bringing all this up? Execution on social matters when sharing messages like this. The visual matters. What you put where matters. The sizing of the visuals matter. It should all be treated as carefully as the messaging.