Home Blog Social Media Tools Facebook gifts: Does it have a future for brands?

Facebook gifts: Does it have a future for brands?

It pops up when you see a story posted by a friend who might be celebrating an anniversary, a graduation or a new baby.

It also, obviously, pops up when it’s someone’s birthday. 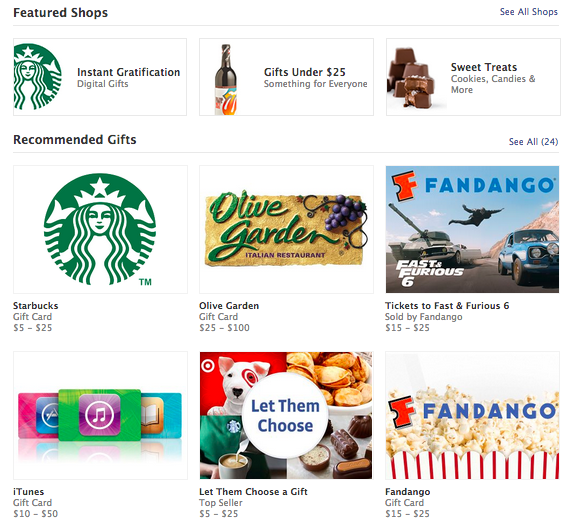 In theory, Facebook Gifts gives you an easy way to send a quick memento to a friend or family member with a few simple clicks.

The question is: How many people are really doing this?

Judging from my friends, a decent amount. I asked if people were actually using Gifts yesterday on my Facebook feed (definitely more people using/receiving gifts than not): 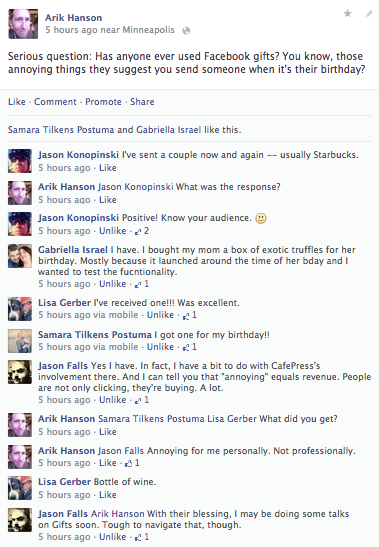 According to Facebook, the company sold $5 million worth of “gifts” in the fourth quarter of 2012. Might seem like a big number, but given Facebook’s user base, that’s miniscule.

But, Facebook’s just getting started. It’s far too early to call this a failure.

And brands are just starting to discover the opportunity here.

But, it seems like there’s probably an opportunity for smaller to mid-sized brands, too. You’re already seeing that pop up in Gifts.

Cookies from The Protein Bakery. Wines that Rock from the Mendocino Wine Company. And soap from Duke Cannon.

I could easily see:

* Smartphone case manufacturers offering up unique cases for under $50.

* A Kate Spade passport holder for under $75.

* Fragrance companies offering up a rollerballs for under $50.

There are many possibilities, and brands are just starting to scratch the surface.

But, the key is: Will people use Gifts on Facebook?

That remains to be seen.

What about you? Have you used Gifts yet? What’s been your experience? Do you think they’ll become popular enough for more brands to get involved?