Home Blog Trends Emojis may be hot, but they’re destroying the art of communication

Emojis may be hot, but they’re destroying the art of communication

By now, I’m sure you’re sick of hearing about my personal stance on emojis as a communication tool.

But, despite my personal feeling, the thundering success of emojis rages on.

Obviously, they’ve long been a tool for texting. But, in the last year they started showing up much more frequently on Facebook, Twitter and Instagram (just to name a few of the spots).

Heck, they’re even showing up in news releases, thanks to Chevy. 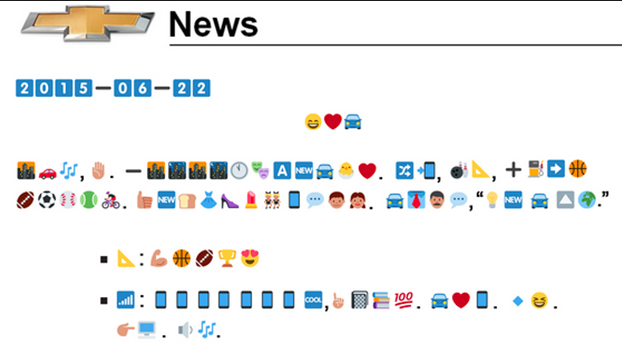 But, they’re also destroying the art of communication.

Yes, I know communicating with emojis is trendy.

Yes, I know communicating with emojis is fun.

Yes, I know communicating with emojis is easier for the reader (visuals vs. text discussion).

But, it’s destroying the written word. Little by little. Emoji by emoji.

And that’s a big deal for an industry (PR) that’s completely built on the written word.

How is it destroying the art of communications? Consider the following:

Kids already have difficulty learning to write coherently, creatively and effectively in school. Now, these kids are communicating less and less with written expressions, and more and more with visual cues. Gotta believe that’s not helping.

It’s fun to use emojis. In texts. On social networks. In email communications with your professor (I bet it’s happening). It’s not fun (for most people) to write–and write well. So, as emojis proliferate, and more people use them, fewer people are using the written word. Not good.

Learning how to think visually is a great thing. I’m not disputing that. But, learning how to express your thoughts via the written word is a different skill. And, I would argue those who learn to write well are the same people who go on to become strategists, VPs and presidents. Learning how to communicate via the the written word is a pathway to strategy. In my experience, most of the people I see ascending to senior-level PR/communications jobs are those with strong to very strong background in writing–not design/visuals.

So year, are emojis a fun and light-hearted way to communicate to friends? Absolutely. But, I’m not sure they should a major presence in the PR and communications world–and that seems to me what is increasingly happening.

Does that concern you as much as it does me?