Home Blog Case Studies|Guest Posts|Uncategorized Do communicators have a responsibility to calm rhetoric?

Do communicators have a responsibility to calm rhetoric? 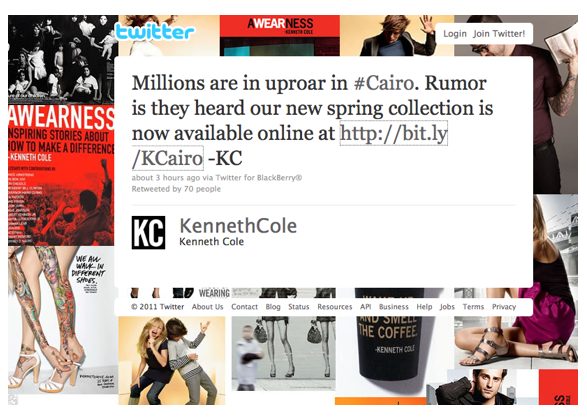 The following is a guest post from my friend, Mary Barber, whom I commiserate about all things PR and PRSA from time to time. We got to talking on the back channel about the Kenneth Cole situation yesterday–this post is an outcome of that conversation.

Early Thursday morning (for me anyway in Alaska), an international shoe company became the latest to fall victim to a social media blunder. Here’s what happened: a single tweet (since removed by the shoe company) insensitive to the political situation in Egypt quickly snowballed into a fake twitter account; a card company creating a section of its website for the worst tweet responses; and some rather vicious discussion.

The company quickly apologized – at least twice – but the damage was already done. For more than two hours, the vicious replies to the original tweet were passed on with no mention of the apology. 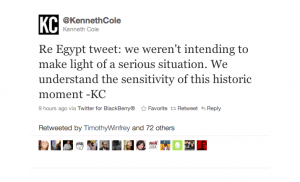 Not wanting to add to the discussion of whether or not the tweet was in good/poor taste as there’s really no discussion there, I would rather address what I believe is the responsibility public relations and communication pros have in cases such as this. That responsibility is different from that of the general public if only for the simple reason that we understand the power of words.

There are two core values of PRSA’s Code of Ethics pertain to this situation:

* Protect and advance the free flow of accurate and truthful information

On the surface, these two sections deal with fair, honest and open communications. Depending on where you focus, the massive discussion on various blogs, Facebook and Twitter could be seen as open communication. But…were they fair and accurate? Were they truthful? 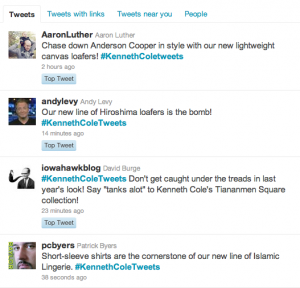 The immediacy of social media tools can sometimes cause people to just “react” without thinking or even researching. As a result we are contributing to the denigration of conversation and causing further damage to the free flow of information.

If a company knows that it could be “attacked” on social media for something it says, why would they join the discussion? Are fear and intimidation from Twitter restricting our ability to have a free flow of information? Do we, as communicators, have a responsibility to be accurate?

As communications professionals who understand the power of the printed word, we have an obligation to take a step back. A few questions we should always ask ourselves:

* Is something more to the story?

* Should I reframe the story to include more of the information?

* Is this really true?

* Should I check a bit before reposting?

* Is there really a benefit to my followers in passing this on?

* If it was my client/company, would I really want this message to be passed on?

* If someone said this about me/my organization how would I react?

This fall I spent time on a political campaign. This experience really solidified my concern about social media as something of a bully pulpit. There is a force in our country that believes they can say whatever they feel on various social media sites while basically hiding their identities from general public. They “spew” without any regard for truth or what impact their words might have on others. As communicators we have an obligation to not join them. Instead we have an obligation to remember that words can hurt…they can hurt a lot.

Mary Deming Barber, APR, Fellow PRSA, is president of The Barber Group, a communications consultancy created in 2000. She has counseled clients in Anchorage and San Francisco for more than 30 years. In addition, Mary has worked with variety of food organizations and been a key team member on two successful US Senate campaigns, spending time in Portland, Denver, San Francisco and Anchorage.

She serves on the Whitman College Alumni Board and as chair-elect for PRSA’s College of Fellows and is a past national Board member. She recently served on PRSA’s national Board of Directors and one on the PRSA Foundation’s Board. Mary was president of the Ad2 Division of the American Advertising Federation and the International Foodservice Editorial Council.

Mary served on the board of directors for the United Way of Anchorage where she led a multi-year project to identify Anchorage’s strengths and weaknesses and begin building a better community. She is a member of the Athena Society.