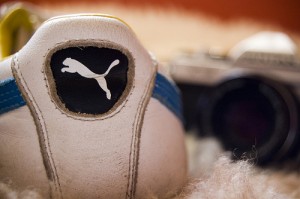 I’ll admit it. I’m a PUMA geek. And, that may be putting it lightly. I have five pairs of PUMAs. And, I have my eye on at least three other pair.

I’m a huge fan. And, I’m definitely not alone.

How do I know? I was at a PUMA fan party at the Mall of America a couple weeks back. It was an invite I received through my email subscription (I opted in a while back), but I also noticed they were promoting it on their Facebook fan page, too.

But, as I was reveling in my PUMA geekness at the party, I couldn’t help but wonder if PUMA was missing the boat just a bit.

This was a party that would have been perfectly suited to other PUMA geeks like me (like my friend and fellow party-goer, Kasey Skala). As it stands, I’m guessing about half the attendees were true PUMA geeks–the other half just wanted free stuff (drinks, gift certificates and the grand prize, an iPad).

Now, I’m not against freebies–sometimes you need them to get bodies in store. But, we’re talking about a brand that has a crazy loyal following. I should know–I’m one of the crazies.

It just feels like PUMA missed out on an opportunity to make its crazy fans into true brand ambassadors.

What would I have done differently? Thought you’d never ask… 😉

* Cater directly to the uber fans. I would have thrown a closed-door, invite-only party for only the geekiest PUMA fans (similar to the PUMA social parties they’ve been throwing in major markets). In fact, I would have made it so private and exclusive demand would have been substantial (in relative terms). I would have sent invites to folks who have bought 3-5 items from the PUMA store at MOA in the last six months. And, I would have put a different spin on the party. Give us an exclusive glimpse at the newest PUMA shoes–and give us a chance to win THOSE (not an iPad). Have a PUMA shoe designer on site to talk about how they design the shoes and how they choose the colors and materials. And, deck out the party with all sorts of PUMA accessories and details (PUMA napkins, beer glasses, PUMA VIP name tags, etc.). Basically, make these super-fans feel like PUMA celebrities for 3 hours.

* Arm fans with tools to drive traffic and sales. I would have been handing out coupons to fans at the party–40% off your next purchase (remember, these are your loyal fans); and, if you give this coupon to five friends who use it, you get another coupon for a $100 gift certificate (arbitrary number). In other words, incent your super fans to spread the word and these exclusive coupons.

* Hold a PUMA fashion show. I’d have some fun with this. They had a DJ at the party–why not use that concept to facilitate an informal PUMA fashion show? Make it all about PUMA–shoes, jackets, t-shirts. You name it. This would kick-start the party. It would be fun, hip, casual (and, right in the store with a make-shift runway). In fact, you could frame it up as the anti-fashion show in light of your target audience (think PUMA social clientele).

So, those are my ideas people of PUMA. What do you think?