Difference in approach matters for health care leaders on LinkedIn

As we all know by now, here in Minnesota we’re in the midst of a four-week shutdown–at minimum.

For at least four weeks (my guess: probably more). Even though there’s finally a light at the end of this tunnel, we’re in for a pretty damn dark next few months. And, as case and death counts rise here in Minnesota, one constituency has been somewhat quiet until just recently: Our Minnesota health care leaders.

Just in the past two weeks, I noticed impassioned posts from leaders like Andy Cochrane, CEO of Maple Grove Hospital and North Memorial CEO, Kevin Croston, pleading with people to wear a mask, socially distance and stay at home. These posts also advocated for their staff—people who were lauded as heroes in March and April, but now are coming under fire from patients and are on the verge of burnout.

Let’s look at that a bit more closely, because in this case, the execution makes all the difference.

First, take a peek at Dr. Croston’s post (I know it’s from the North Memorial account, but bear with me for a moment).

First, the format–video. We know video is (generally) performing better on LinkedIn. We also know video lends itself well to emotionally-driven topics like COVID-19 and health care. But again, for North Memorial, it was all about the execution. Giving the COVID nurse the floor to emotionally talk about what’s going on in these COVID units at North Memorial drives the point home in a way no text or photo ever could. You can’t see her tears, but you know they’re there. And, you can almost feel Dr. Croston wanting to give her a hug. The emotion isn’t just palpable–it’s right in front of your damn eyes. Very powerful. The only downside (and you probably guessed it by now)–he didn’t post it on his personal account first. I would have thought he’d post there first–then the North Memorial account would come over the top and re-share his post. Classic two-for one. 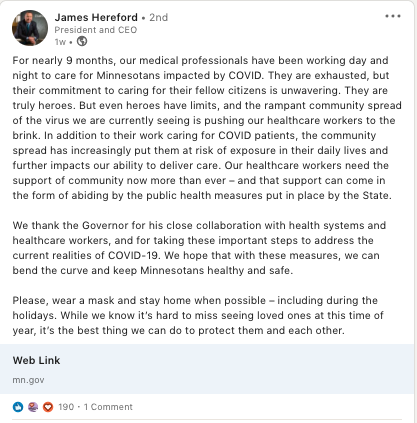 It’s a lot of the same message, right? So why doesn’t it work anywhere close to as well as Dr. Croston’s? Because, visuals matter on the social web of 2020–even on LinkedIn. And, in this case, video told the story MUCH more powerfully than text. Not to mention, Hereford’s post didn’t even have a visual! Finally, like I said above, COVID is an emotional issue–it’s literally life or death. As such, the text of any executive message needs to reflect that. There needs to be a healthy dose of sympathy. And, a lot of human emotion. You just don’t see that in Hereford’s post. It doesn’t come through like it does in Dr. Croston’s post.

First, here’s Cochrane’s message, which is actually more than a post–it’s a LinkedIn “article.” 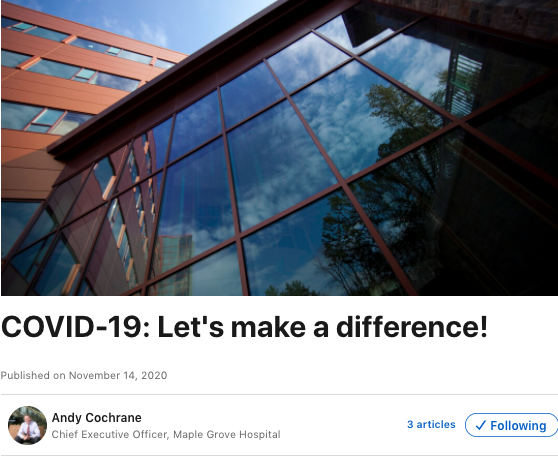 A quick read, you can feel the emotion coming through. In this case, it’s more frustration and anger. He even uses those words in the post. Essentially, he’s defending his team and making a case for people to be more safe to give his hospital and team a break. Really short and to the point–but, effective. Human. Emotional. And, as a result, you saw some comments that seem to support that. 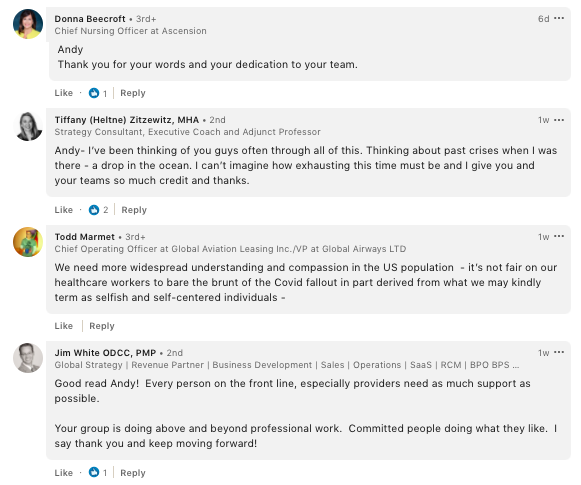 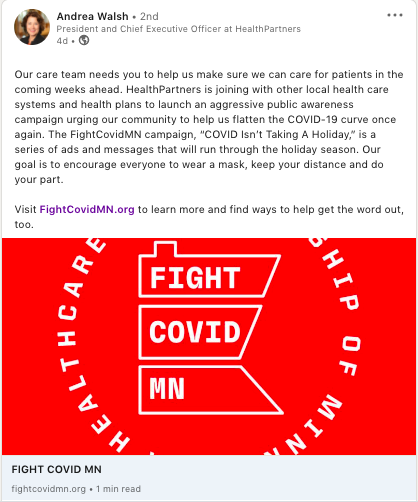 She chose to promote a collective effort recently formed by many (all?) of the health care systems and insurers around the state. It’s a solid message, but it’s pretty stiff. In fact, to make an industry-appropriate analogy, it’s almost clinical. Nothing necessarily wrong with that. Andrea is a well-known health care leader (maybe one of the more respected leaders in our community), so really anything she posts is going to resonate and impact people. But, I would argue she could have done so much more with this. Bring in the emotional element. Bring in the humanity. Talk about your teams at HealthPartners and how, specifically, this is impacting them. And again–visuals matter. Using the link image from the Fight COVID campaign is fine–but it’s not evoking the emotion we want to hit on.

Now look, I’m not comparing these to throw Hereford and Walsh under the bus. But I am trying to prove a point. Execution matters. And, a thoughtful approach matters. In this case, using video was a very wise choice. Getting your executives to open up and show some humanity is a good choice (although, I know that is difficult communicator friends).

In the end, the format and content need to fit the situation. As we continue in this pandemic, I think that’s a good reminder for us all–whether we’re working in health care, retail or B2B.