Home Blog Uncategorized Did Zillow take advantage of its “viral moment” on SNL?

Did Zillow take advantage of its “viral moment” on SNL?

In case you missed it, Zillow had a moment last weekend.

A “viral” moment, to be clear.

Because for about 24-48 hours, a lot more people were talking about Zillow. And, in a positive way (for the most part). 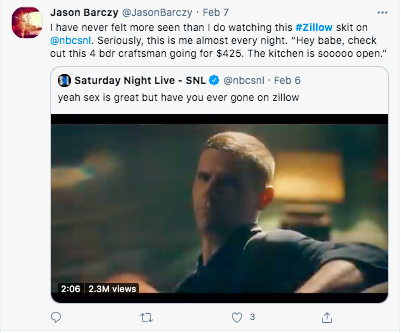 And, not only was it positive sentiment, it was striking a very real chord with A LOT of millennials and Gen Z (my educated guess). 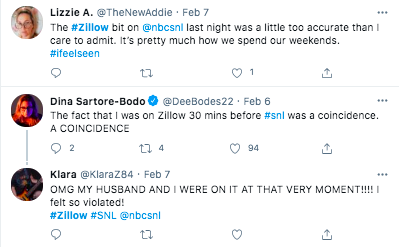 So, certainly, given this wonderful gift, certainly Zillow took big advantage of this situation right? Well, I’ll let you decide.

They did the requisite retweeting, but strangely only retweeted or replied for five accounts. 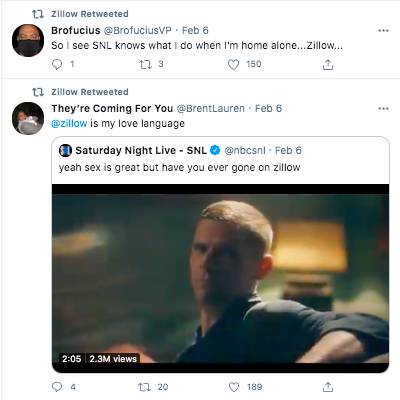 They did post this gem, which generated a fun stream of responses.

Including–and you could totally see this coming–a number of responses from actual Remax agents asking people if they wanted help with listings. Talk about reinforcing the stereotype Cecily Strong was portraying!

Then, they also shared it on LinkedIn of all places. 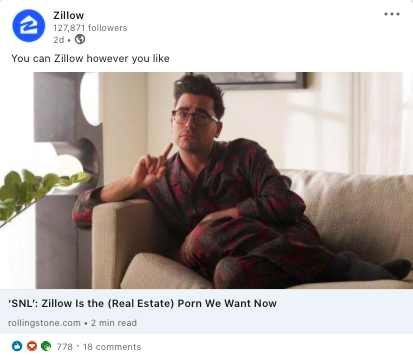 OK, so that was a little weird. But, then they doubled-down on LinkedIn and the CEO shared the post. 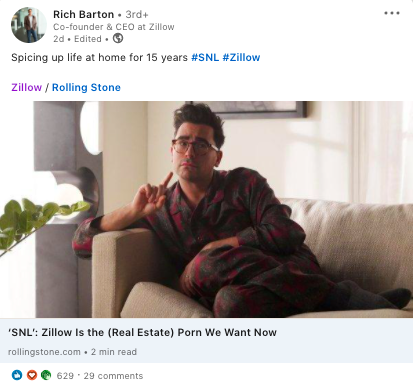 Now, Zillow did react. And, in a timely fashion. However, as I reviewed all this, I can’t help but feel the reaction feels a little short. I mean, again, they did react. Quickly. But, this was a huge SNL skit. It struck a big chord. A lot of people were talking about it–across a lot of social channels. And, all they did was a few retweets and a couple LinkedIn posts?

It feels like they missed out on a larger opportunity:

Doesn’t he resonate with a younger, more millennial fan base? Wouldn’t he be a fun–and timely–spokesperson for the Zillow brand? Why couldn’t they approach him about making this official and working him into some future ad campaigns? Maybe they still will–who knows? But I immediately thought this would be fun for a brand that, to date, hasn’t seemed all that progressive.

SNL hit on something with this skit. Yeah, it was funny. But, they hit on a behavior and activity that so many people are taking part in during this pandemic: Searching for “dream houses” on Zillow at a time when we can’t do anything else. Nailed it. I mean, we saw that in the comments on Twitter, didn’t we? So, why not embrace that trend and quickly generate creative that does the same thing? I’d be all over this if I worked in marketing at Zillow.

Why couldn’t Zillow take the SNL skit and make an extended content series out of this? Have some fun with it? Again–it really struck a chord with people. Clearly, this is resonating. I know they probably don’t want Zillow and “sex” mentioned a lot in the same breath, but it’s out there. And, people took to it. Why not create a content series around this? I’m thinking about a series of still images that play off the bedroom scenes in the SNL skit with the fun phrases from the sketch. You’re telling me those wouldn’t generate a ton of engagement on Twitter, Facebook and Instagram?