Home Blog Uncategorized Did social media platforms learn nothing from the “Stories” rush?

Did social media platforms learn nothing from the “Stories” rush?

Over the last few weeks, we’ve seen the big rush on social audio.

Then, LinkedIn said it was thinking about a Clubhouse rival.

Seemingly, everyone is now in the social audio game now–or, at least has plans to enter it.

But, this all feels very familiar, doesn’t it? Think back a year or so ago to the rush on adding “Stories” functionality to social media platforms. Didn’t we see essentially the same thing?

Stories was really introduced by Snapchat years ago. But, Instagram quickly copied them. And, for the most part, they’ve worked pretty well on Insta. People use them all the time. You could argue, in fact, that they’re THE way people use Instagram now.

But, then Facebook got the big idea that they needed Stories. Then, Twitter, Then, LinkedIn. Then, Spotify!

Huge rush on Stories, right? Certainly that must have panned out. Certainly, Stories functionality must be used by a ton of people on all those platforms.

Look at Twitter, for example. First question: Are people even using Fleets? According to the only data I could find, only about 8% of users have posted and viewed Fleets. And, more importantly, 54% of users said they had not viewed or posted Fleets.

What’s more, when asked why they haven’t posted Fleets or used the new functionality, half of all users said they didn’t want to post that type of content on Twitter, and another 29% said they already post Stories on other apps. GO FIGURE! 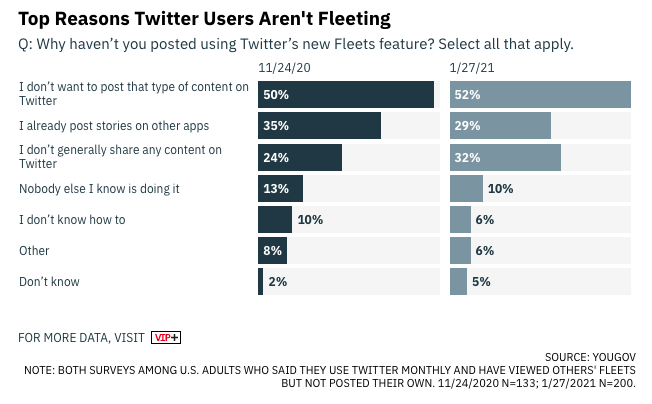 Or, what about LinkedIn? When I polled people a few months ago on if they planned to use Stories there, only 8% said “yes” and more than half said it was a “complete waste of time.” Now, I know this is a small sample size, but I’ve seen similar polls before with almost the exact same results (and I have yet to find any stats on LinkedIn stories, which is damning in and of itself). 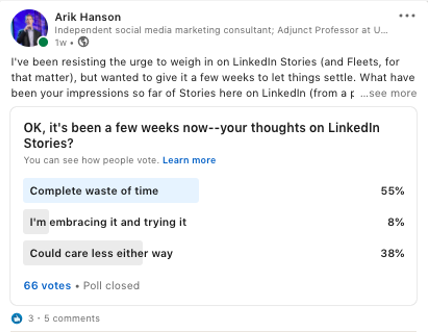 So, why haven’t the social media platforms learned this lesson? Clearly Stories should have told them, “we don’t have to be all things to all people.” Or maybe, “our users aren’t asking for this functionality–why are we adding this again?”

Instead, we see a big rush on adding social audio.

Now, maybe social audio will be the cat’s ass. The next big thing. The breakthrough functionality we all need everywhere.

But, I doubt it. I think it will remain fairly niche. After all, by my math, Clubhouse had just over 6 million users by last count. That’s not exactly a massive user base.

What’s more, I don’t see people on LinkedIn clamoring for social audio. I don’t hear my family members asking why Facebook doesn’t have social audio. Very few people even know what social audio is at this moment!

I’m curious to see what the growth curve for social audio is over the second half of 2021. But, I’m also cofounded: How did these social platforms not learn their lesson from the “Stories” rollout>