Companies speaking up on social issues: Lessons learned so far in 2021

Should the company speak up in support of Asian Americans?

Should the company stand up against racial injustice?

Should the company take a stand on voter suppression laws?

These are some of the questions many companies are wrestling with in 2021 as they try to figure out when and how they speak up on a variety of social issues.

It’s a huge topic right now because customers AND employees are pressuring employers to speak up–and act. According to one recently survey (see below), as many as 76% of 18-34 year-olds like it when CEOs speak out on issues they care about.

As organizations try to figure out how they approach this difficult challenge, I thought we’d examine some recent examples–and what your company can learn from what others have done so far. 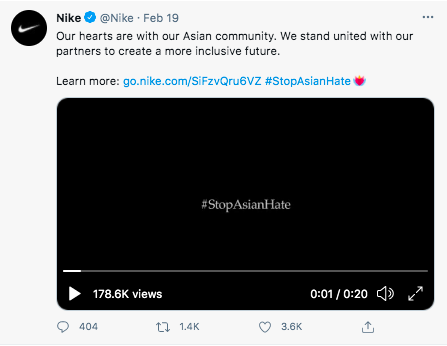 Like many other companies, Nike stood against Asian Hate back in Feb. on the heels of the issues in Atlanta. Now, Nike does have a track record of taking public stands on social issues like racism. However, in this case, it backfired a bit considering their supply chain and labor practices–a topic that’s been a point of contention for years.

In this case, a lot of people couldn’t see past the labor practices. To many, the two issues are linked. “How would you speak against Asian hate when you’re using cheap labor in Asian economies?”–that’s the feedback they saw in a big way. 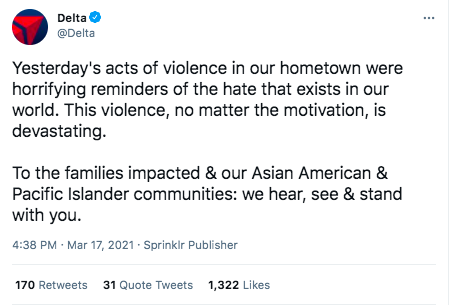 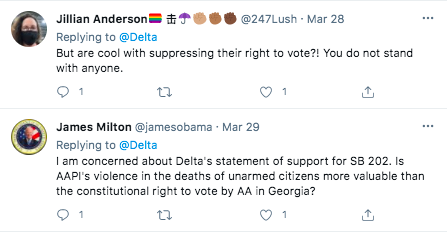 Back in March, Delta spoke up against Asian Hate after the horrific incidents in Atlanta, where Delta is based. However, the timing was tough, since Delta had just gone silent (although they did come out against the legislation later) as Republicans tried to push through legislation that restricted voting access. Their fans and customers took the opportunity to raise the latter issue instead of the former.

In this case, people seemed much more interested in talking about voter suppression than they did Asian hate crimes. The lesson: Be mindful of timing. Just because you’re standing for one issue, doesn’t mean people won’t take that opening to burn you for your support of another issue.

Las Vegas Raiders – You don’t ALWAYS have to say something 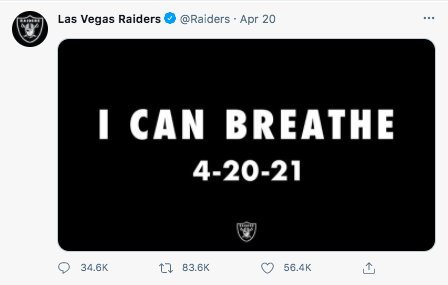 When the verdict was announced in the Derek Chauvin trial, some companies chose to make a statement. One of those, unfortunately in hindsight, was the Las Vegas Raiders. They chose to go with the statement above. Not surprisingly, this didn’t go over well. The tone was off–way off. But more importantly, they didn’t have to say anything. They could have just as easily retweeted the NFL’s official statement on this topic. Instead, they came across as thoughtless and uncaring for a tweet that was supposed to engender support and goodwill.

Under Armour – Be ready to offend half your audience 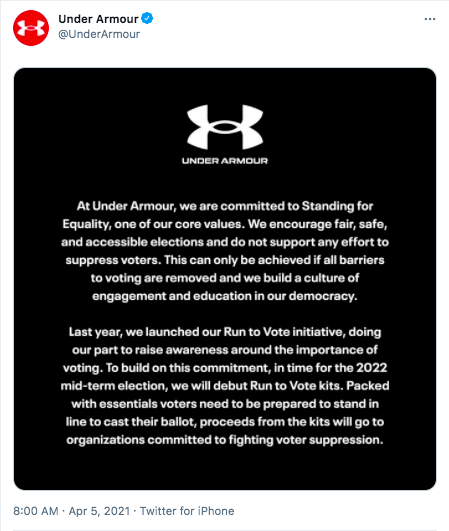 Michael Jordan had the famous quote in the 80s: “Republicans buy sneakers, too.” The same corollary kinda applies in 2021 when taking public stands. Under Armour chose to take a stand on the voter suppression legislation, which has tended to be a fairly party-line issue.

So, effectively, as Jeff notes above, you may be alienating half your customers base–or more.

Look, this is a very difficult area for brands to navigate right now. No one has the answers. There is no textbook or course to work from when handing this. And, there are no de facto experts who have it all figured out.

However, I tend to think you can always learn from case studies like these. Studying the decisions and actions of others is a good input to your own decision-making process. And, as you try to help your company navigate these uncertain waters, I think one key point stands out: Make sure whatever stand you take, whatever position you assume, that it aligns with your company’s vision, mission and values. If it doesn’t, you’re bound to be labeled as another “virtue-signaling” organization.