Earlier this week, you may have noticed Chevy broke some new ground in the world of PR.

Yeah, you heard me. All emojis. No, for realz.

And, the new Chevy Cruz is obviously a vehicle that’s targeted at that younger generation. So, speak their language, right?

And, we know brands are always looking for “new and inventive” ways to bolster impressions, shares and mentions during launch events like this. 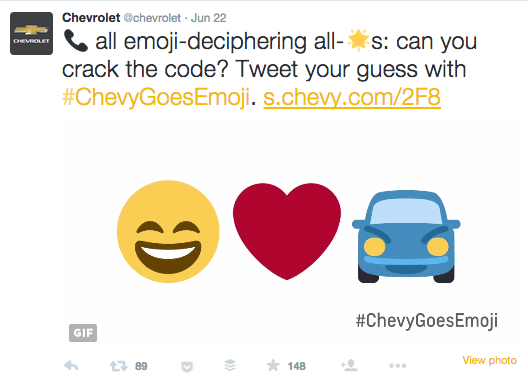 So, on the surface, I get this. And, on many levels, I actually applaud it. To start, let’s look at a few different reasons this makes sense for Chevy:

Any PR agency/consultant will tell you–it’s hard coming up with new ideas for launch events. Because everything has been done. And, not every new launch event can or should be talked about incessantly for days on end. But, it’s always there–that ask. “We want more buzz built around our new product launch.” So, in this way, I think this is a win. According to a quick search on Keyhole, #chevygoesemoji has been mentioned by 599 users over the last two days with more than 22 million impressions. And, if you look at the stream, it’s actually pretty positive. Bottom line: People are actually talking about the launch of a new care. I can’t believe that happens too often.

You might think an all-emoji news release is the most ridiculous thing in the world (I kinda do), but you can’t really say it’s not creative. Especially for the PR industry, which, let’s be honest, comes across as pretty darn conservative most of the time. Chevy took a big risk here. On the surface, it looks like that’s paying off.

Integrating celebs of all stripes well

Another thing Chevy did well with this launch–they integrated celebrity endorsers well. And not just the A-list celebs like Norm McDonald and Zendaya.

You might think–big deal, right? Well, the Tyler Oakley tweet from Tuesday had 1.8K retweets and 8K favorites at last count. The Zendaya tweet: 1.1K and 2.5K. By contrast, no single tweet sent by @Chevrolet over the last two days has garnered anywhere near those counts. So, there’s that.

A news release NOT aimed at journalists

That’s one of the more interesting angles here. The release is clearly not written for journalists. It’s written for consumers. It’s a direct-to-consumer play. That’s a much different way to think about PR–again, a big risk. I’m sure Chevy is still working with journalists to get the launch story placed–they’re just not doing it with a news release. 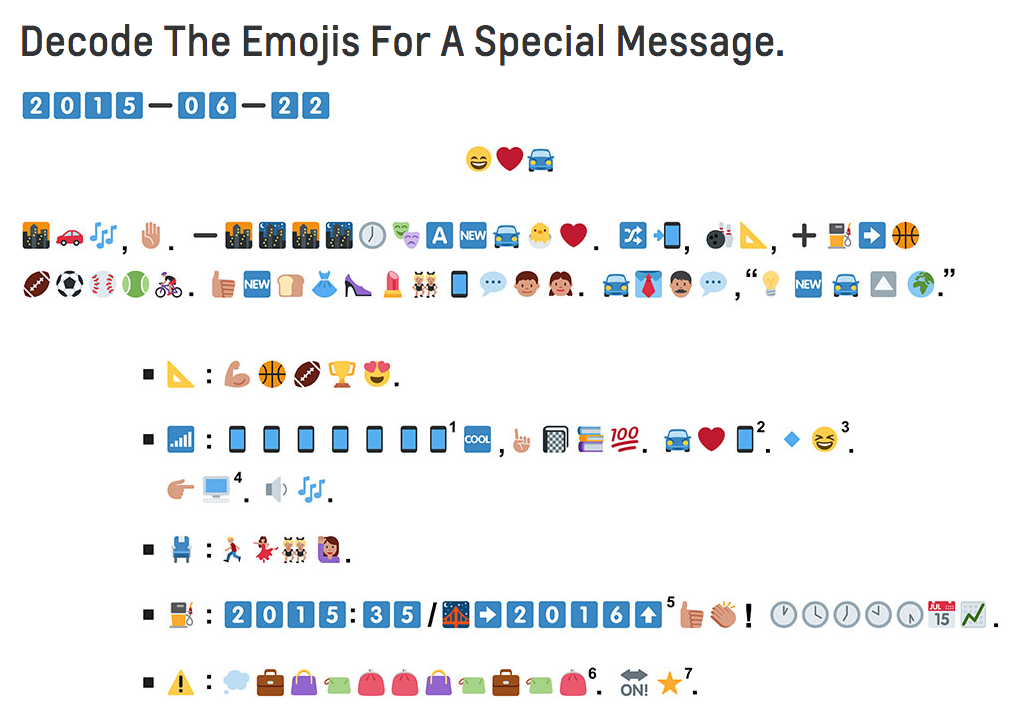 So, I’m trying to talk myself into liking what Chevy did here.

But, I can’t quite get there.

Because if you take a step back, doesn’t this kinda feel like all those brands that jumped on the “real time marketing” bandwagon after the Super Bowl Oreo tweet?

Another thing that kinda bugs me: Is this really “on brand” for Chevy? Again, I know the Cruze is targeted at younger drivers, but this emoji thing is getting a little out of control when it comes to brands. Yeah, people use them in daily communications on their phones. But, that doesn’t mean they want to hear from the brands they follow/use in all-emoji language.

Bottom line: I like the creativity here. I like that Chevy took a risk. I like that they had some fun with what is ordinarily a pretty garden-variety tactic (news release). But, I just not 100 percent sold that this was a brilliant move.

But then again, I’m not on the Chevy team. I don’t get to see the results and how they align with their goals.

This could end up being a gigantic win.