Can Facebook serve as your restaurant’s primary Web site? 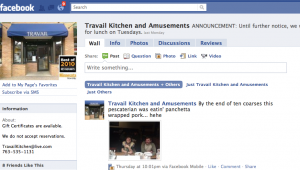 Lately, I’ve been noticing an interesting trend among local restaurants and haunts across the Twin Cities: They’re trading in their Web site for a Facebook page. In some cases, these restaurants aren’t even bothering with a site–they’re going straight to Facebook.

The benefits of this strategy are clear:

* Easy to set up (it takes, what, about 15 minutes to send up a brand page on Facebook?) 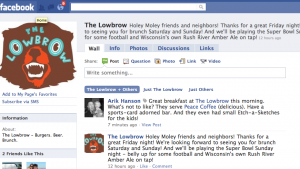 * Opportunity to build awareness and momentum quickly (a new restaurant in my hood, The Lowbrow, just opened two weeks ago and already has 296 “fans.”

No brainer then, right? Not so fast. There are also a few downsides to this approach. Among them:

* Lack of control. If you’re hosting your primary Web presence on Facebook you need to go in eyes wide-open that Mark Zuckerberg now controls your Web site. And, he can (and has) change(d) the rules whenever he likes.

* Pass-along value. As much as Facebook represents an opportunity for restaurants to spread word-of-mouth quickly in a positive way, it also means negativity can spread just as fast. Someone saw a rodent scooting across the floor of your restaurant? All it takes is one post on your wall and that’s going to get around fast.

So there are viable pros and cons to this approach, right? In my mind, after weighing those, it comes down to your appetite for risk. And whether that risk is worth it. If I’m the owner of a smaller restaurant (not a chain), I really like the idea of using Facebook as your primary Web presence. Here’s why:

* Maintain top-of-mind awareness with customers. Because you’re updating regularly on Facebook, you’ll stay more current and top-of-mind with loyal customers–those who can recommend your haunt to friends and family easily.

* Easy-to-read menus. By far my biggest beef with restaurant Web sites is their innane insistence on posting menus via PDF. It requires extra work on the users part and aren’t easily scannable on mobile devices. On Facebook, you could post menus via a Status Update (check out how Minneapolis-based Travail handles this) or using a custom tab–all of which would be easy to find and scan.

* Mobile friendly. Just by nature of its platform, Facebook plays much nicer with mobile devices than certain Web platforms do (think of Flash sites–Yuck!). Why is this important? Think about how many restaurant decisions get made on the fly by people when they’re out and about? Gotta be a big percentage, right? If your Web site has Flash or is difficult to download, you’re effectively telling your customers that you don’t care. By making it that hard for them to access your site, you’re telling them they don’t matter.

* Maximize limited resources. Sure, a restaurant could build a Web site and a Facebook page. Wouldn’t be that tough. But, Web sites cost money. And, what are restaurant owners typically short on? You guessed it. Plus, why not take the money you were going to invest in a Web site ($10-20,000+?) and spend it on more strategic marketing advice from a professional? I know this is a bit self-serving coming from me, but I don’t have a single restaurant client and truth be told, I’m not sure I would want one. I’m really just making a larger point: Use your limited resources where you’re going to get the most bang for your buck.

The Facebook-as-a-Web site strategy makes even more sense when you think about the other sites that could complement this approach. Specifically I’m thinking about Yelp and UrbanSpoon here, but there are others. Using Facebook, you could implement a strategy where you’re regularly asking for reviews from your loyal customers on these sites. All producing even more valuable SEO for your restaurant. 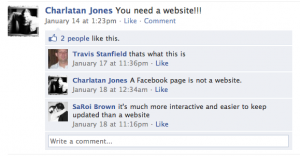 So, what do you think about restaurants using Facebook as their primary Web site? Good idea? Or, pure craziness? (I thought this snippet from Travail’s Facebook page sums up the discussion for me quite well)