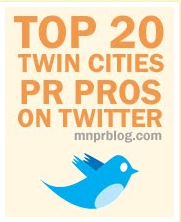 Last week, I was named to two different local lists: Ryan May and Kary Delaria’s top 20 PR pros on Twitter list and Judy Grundstrom’s Top 10 Social Media Titans list (in nomination phase–“winners” will be announced Thurs. night at what sounds to be a great event in Minneapolis).

I don’t bring this up to boast, but instead to talk about the growing backlash toward lists and the usefulness they serve on the business side of the house.

Over the last week since these lists were revealed, I’ve heard a lot of offline chatter about both lists. For the most part, the conversation centered around two issues: How the lists were put together and who was on them or who was left off. 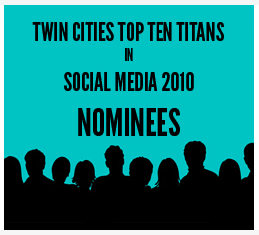 These two blogs/folks took different approaches to developing their lists. Ryan/Kary used a more methodical, data-driven method to identify the top 20 PR people on Twitter in the Twin Cities, while Judy used a simple nomination process.

Is one more credible than the other? Not really, in my view.

Were there people who “deserved” to be on these lists that were left off? Definitely.

But here’s the thing, it doesn’t matter. Why? Because it’s a friggin blog, that’s why. It’s a form of personal expression.

What do I mean? Allow me to elaborate (in bullet-shaped fashion):

* It’s your damn blog–say what you want. Blog are personal. Many start them to express themselves in one way or another. List posts are simply an extension of that expression. I wrote a post about the top 7 most intriguing people in PR in 2010 earlier this year. Did that mean those who didn’t make the list weren’t intriguing? Of course not. It simply meant that those were the 7 people that I found to be particularly intriguing at the moment. You have some folks to add? Add them in the comment stream. Isn’t that what a blog’s all about?

* It’s your damn blog–it’s not the Wall Street Journal folks. We’re bloggers. We’re not professional journalists (well, at least most of us aren’t, at least not by trade). We’ve never claimed to be. We never claimed to be objective either. Again, it’s personal. It’s subjective. It’s an opinion. It’s not meant to be a Forbes 100 list. Let’s leave it at that.

* It’s your damn blog–you shouldn’t have to feel ashamed. Most of all, you shouldn’t feel badly for leaving someone off a list you created. Again, it’s your personal opinion–if someone has a different opinion, leave it in the comment thread or start your own blog. Incidentally, this exact scenario may have been what led to Judy’s initial Titan post last year. She challenged me for listing myself on my own list in 2009–which I readily admitted afterward was a lapse in judgment. She then created her own list, which may or may not have been impacted by that conversation (sadly the comments I’m referring to on my post were seemingly lost when I switched over to DISQUS earlier this year).

My personal takes aside, lists are also powerful and important community and traffic-building tools from a business perspective. Don’t believe me? Take a look at the number of retweets and Likes on Judy’s nomination post. Think that’s helping drive traffic to her site (and awareness for her business)? What about Ryan’s blog? How many unique visitors did he get on that post? Ever looked at the Social Media Examiner site lately? A ton of lists. People like lists because they’re easy to read and scan. They’re consumable in bite-sized chunks. And, for lists like Ryan and Judy’s that feature people, let’s face it, it’s all about us. We like to be recognized. We like to see our name on a blog. And that’s OK. And there’s no reason businesses shouldn’t take advantage of that sense of human nature. After all, it’s a week later, and I’m still talking about Ryan and Judy’s lists–clearly, it’s working.

What do you think of lists like these? Overplayed and dying? Or are they still valuable community-building tools?