Home Blog Uncategorized Are bloggers the Rodney Dangerfields of the online world?

Are bloggers the Rodney Dangerfields of the online world? 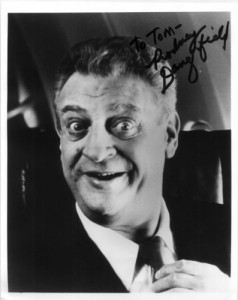 “No respect, no respect.” That was Rodney Dangerfield’s signature line, right? Isn’t that what we hear from bloggers on a daily basis?

What’s more concerning is what we hear from PR pros, journalists and the general public:

“Why would I read blogs? Only geeks read blogs, and they’re just opinions.”

“There are so many blogs out there. I don’t have time to find them and read them all.”

Whatever the complaint, bloggers get a bum rap from just about everyone these days.

And I’m hear to say it needs to stop. Now.

Not because I am a blogger. But, because it’s simply not warranted.

Let’s take on the arguments one by one:

“Why would I read blogs? Only geeks read blogs, and they’re just opinions.”–Ask the 1.9 million unique visitors (courtesy Compete.com) why they read the Huffington Post in February. Or, ask virtually everybody in the PR/markering/social media industry why they read Chris Brogan’s blog. Yes, these blogs (and thousands like them) espouse opinions. But, they’re opinions rooted in deep experience. They’re folks who are living and breathing in their respective industries every day. And since when aren’t we interested in key influencer’s opinions? These are smart people, folks. Their opinions matter. And so do ours.

“Bloggers aren’t journalists. They don’t have the training.”–No argument here. I’m not a journalist. David Mullen isn’t a journalist by training. Dave Fleet? Nope, he’s not either. Does that mean their opinions, ideas and thoughts don’t count? Absolutely not. Does it mean I don’t read the daily newspaper in my home town or watch the 10 p.m. news? No. Can’t I get my information from both sources? Why are we so hard on bloggers? Just because they don’t have journalism degrees doesn’t mean they can’t write. Heck, most of these folks write just as much in a day as any journalist. They may not have the formal training, but writing every day for a living counts for a lot. Journalists definitely have their place in the world. And I think bloggers have carved out a valuable niche, too. They can, and should, co-exist.

“There’s so many blogs out there. I don’t have time to find them and read them all.”–According to Technorati, there have been 133 million blogs started since 2002. There are 346 million people globally that read blogs. And 900,000 posts are added to the blogosphere every 24 hours. Those are crazy numbers. Overwhelming. But remember, a big chunk of those 133 million blogs have already died on the vine. My advice? Focus on the blogs worth reading. For instance, I read Dave Fleet, Lauren Fernandez, Jason Falls, Todd Defren and Danny Brown (among others) regularly. They’re proven bloggers who share well-researched and developed thoughts and ideas regularly. Hey, I know there’s a ton of junk out there. That’s why I ignore it. Focus on the steak. Throw away the grizzle.