Are agency PR counselors better networkers than their corporate counterparts?

The title of this post represents a general observation. But, I’ve found it to be more than a trend.

Case in point. My time at a major health care system here in Minnesota.

I was at this health care organization for two years, and during that time, I was a part of PRSA. On the board, in fact. 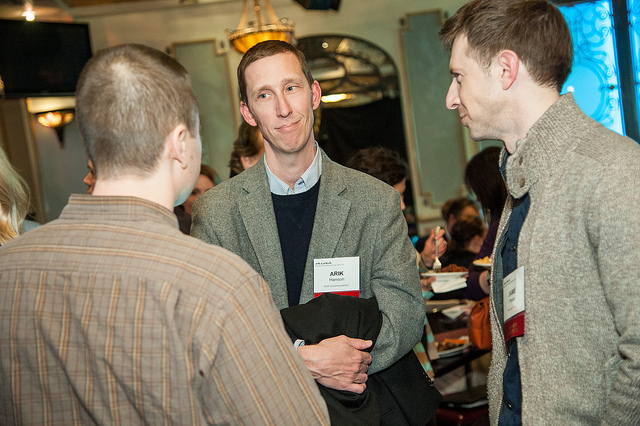 I also started blogging about that time. So, I would get together with people outside this health care org from time to time for coffee or lunch. We’d discuss online marketing, social media, PR, you name it. But, most of the time, the discussion would also leave me thinking. And that thinking sometimes translated into results for this health care org.

On the other hand, many of my colleagues at this health care organization were not involved with professional organizations. In fact, I could probably count the number of people who were actively involved on one hand.

Outside of a handful of people, I rarely heard of others getting together for coffee outside of this health are organization. And people almost laughed at me when I mentioned I was attending an event outside the organization.

Case in point #2. I’ve received a couple emails recently from friends introducing me to folks around town here in Minneapolis. Both these folks worked at Fortune 500 companies here in town. And both (as called out by my friends who emailed me) had admittedly small networks outside of the organizations they worked for.

And, as I think about some friends I know who work on the corporate side, the same holds true–generally. It’s not always the case, but more often time than not, the corporate folks are less networked.

On the other hand, the agency folks are everywhere. Again, generally.

Now, I know some of that has to do with the fact that agency folks get paid to show up more often (or, in Curtis’ case, he’s in new business development, so literally, he gets paid to network). It just makes good business sense. In many cases, the agencies are pushing their employees to do just that (but sometimes they’re not–agency just attracts that kind of person in my opinion).

However, what would you say about the corporate folks? Why don’t they show up as much?

I have a couple theories.

First, when you’re on the corporate side, it’s easy to become insulated. You start drinking that Kool-Aid, going to meetings and next thing you know you’re rah-rah company X and nothing else matters.

Second, I think some of it can be attributed to outlook/attitude. Agency types tend to be a bit more transient than corporate types. How many agency folks do you know who have been with the same agency for more than 10 years? Not too many, right?

Now, go look inside the bigger orgs in your market. How many people have been in those roles for more than 10 years? A LOT more.

People go corporate because they want stability. Less crazy hours. A long-term job (even though most would argue that doesn’t exist anymore). They want a bit more control of their lives. And, as a result, they may stop networking. After all, if I have this great job at Target (just for example), why do I need to network? I already have my dream job! Say what you want, but I really think that factors in.

Again, I’m not saying ALL corporate folks are like this. But, I definitely see a trend.

That’s my two cents. What do you think? Is this really a trend? Or, am I the only one seeing this?