Answering 6 key questions about Facebook big changes to the newsfeed 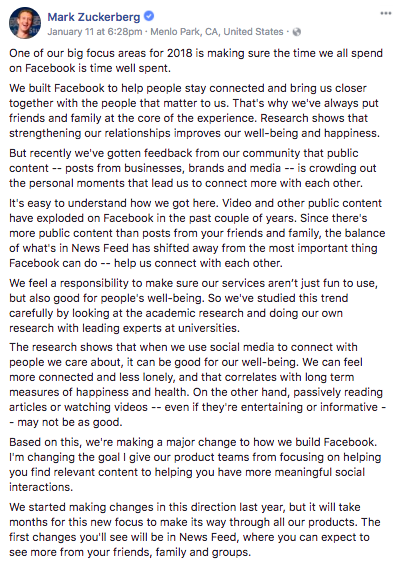 In essence, Facebook is going to focus more on facilitating interactions and engagements between users and their friends and families. Which, as you may guess, could come at the expense of brands and their engagement and content strategies on Facebook.

Not surprisingly, most people are a bit concerned. And, people have a LOT of questions.

So, I thought today I’d take dead-aim at some of of the more common questions I’m anticipating from clients and friends in the week ahead.

Question: Will brand Facebook posts really be impacted all that much?

No one knows for sure. Facebook is certainly saying they will. But, we’ve been down this road before (in 2016, for example, Facebook shared similar news). Now, this announcement feels a little different. And, the culture is much different than 2016. So yeah, I believe brands may take a hit in certain areas. Promoted videos, for example, could be impacted. A lot of brand videos are drumming up tens of thousands of “views”, but not much engagement these days. I see that continuing in the months ahead. On the flip side, Facebook is encouraging brands to produce more “live” videos which, historically, have driven more live engagement. This isn’t a bad idea for brands as a segue to sharing more produced video content.

For now, I would say “no.” I’d like to see how the first quarter goes in terms of results before making any big changes to your media buying plans. But, I’d be taking a very careful and thoughtful look at my Facebook ad buys in January, February and March. After all, Mark Zuckerberg did say: “As we roll this out, you’ll see less public content like posts from businesses, brands, and media.” That’s not exactly positive news for brands. But, on the flip side, Facebook makes a lot of revenue each quarter from brand advertising on Facebook. I’m not a Harvard MBA, but I’d be hard-pressed to believe they’re just going to shut that off in three short months (or, ever, really). My suggestion, again: No sudden moves for three months. But, take that time to carefully evaluate your campaigns and make an informed decision at the start of Q2.

Question: Will time spent on Facebook go down as Zuckerberg predicted?

Question: Should brands now shift their approach to an engagement-only strategy?

First, I’d refer you to the question above. I think it makes sense to take a few months to evaluate your results to see how this thing plays out before making any big, sudden moves. In the meantime, I think this is worth testing. So, could you create 1-2 engagement-focused posts in January and February to see if they drum up more engagement than your other posts. Maybe a simple question for your fans? A conversation starter around a particular timely topic? At this point, you should know the topics and questions that can get your fans going. I’d try some testing in the next couple months to see how this works before shifting your entire social content strategy based on one Mark Zuckerberg post.

Question: Does this change put the onus on brands to respond to comments more consistently in the feed?

I’d argue brands should be doing this anyway–yet, far too often, we see brands completely ignoring comments in the stream. So, I guess I’d be doing this one anyway. But, if Facebook does indeed shift to featuring more engagement-focused content in the feed, this will become even more important. “Liking” and responding to more customer comments will become table stakes (again, even though, this should be obvious already).

Question: Doesn’t this news mean the “like” will become even more irrelevant?

Yep. And, it also means the “share” becomes even MORE RELEVANT. Think about what Facebook said in its announcement. It’s going to feature more content that family and friends are sharing–why can’t your brand be supplying that content that they are SHARING? On the brand side, I think the big takeaway here is simple: Post fewer times instead of posting more often. This will force you to focus on the content that’s truly interesting. In essence, it will force you to focus more resources on producing content that’s inherently more shareable for your customers.