Amazon case study: Should rank-and-file employees be speaking on behalf of brands?

Numerous follow-up stories were written. Facebook was abuzz. It was an A topic for a few days.

But, along the way, we heard from one surprising source as the story unfolded: An Amazon employee.

Nick Ciubotariu, head of infrastucture development at Amazon, weighed in with this post on LinkedIn on Sunday. 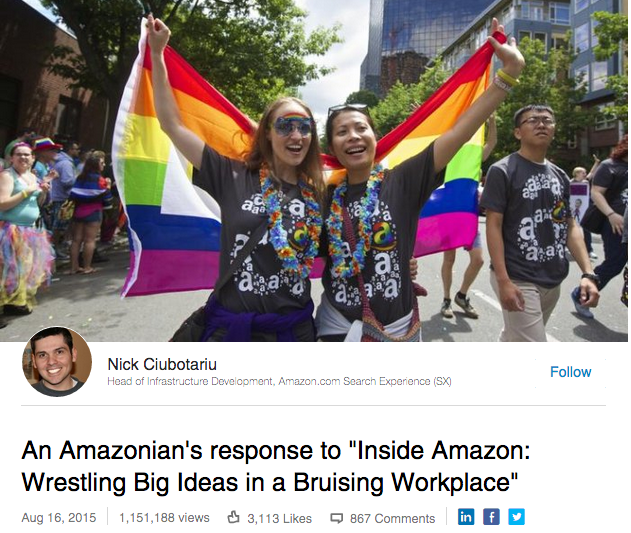 Safe to say Nick’s post got people’s attention. So much so, that is was then referred to in many media stories after the initial story in the Times.

But here’s the thing: Nick wasn’t authorized to speak on behalf of Amazon.

He clearly stated as much in his post. And, he goes on to talk about how he never checked with the PR team first and how he knew all about Amazon’s social media guidelines and went ahead with the post anyway.

I’m sure the PR team was thrilled with his decision.

And, this opens up, yet again, a discussion we’ve had before: Should employees be empowered to speak up during a company crisis or firestorm?

In this case, it seems like things worked out OK for Amazon. While Nick’s post was clearly passionate (albeit probably a little defensive), it also sought to outline facts within the context of Nick’s personal experience at Amazon. I don’t see a lot wrong with that.

And, on the surface, it doesn’t appear that Nick broke any big company guidelines. According to Amazon’s Corporate Governance page, “In performing their job duties, Amazon.com employees should always act lawfully, ethically, and in the best interests of Amazon.com.” I think Nick falls within those bounds. But, we don’t know exactly what Amazon’s employee guidelines say when it comes to social media use. So, at the end of the day, this is all speculation.

But, the question remains: Should employees be empowered to speak on behalf of a brand during a firestorm?

If you asked most PR counselors this question, the answer most likely would be a resounding “no.”

After all, we were trained to control and shape the corporate message strategy. How can we do that if employees are spouting off left and right on LinkedIn, Twitter and Facebook?

And, of course, there are legal considerations. Some employee handbooks strictly prohibit employees from speaking their mind about company issues online. Legal isn’t a department to be trifled with, let me tell you.

But, I tend to think there’s a bit more here to discuss.

There’s a reason Nick’s message resonated with so many people.

There’s a reason it has 1 million-plus impressions.

There’s a reason people are talking about it.

It was written by a human being.

We know that because his name was directly above it.

We know that because it came from his LinkedIn profile (which, at least for most employees, is not controlled by the company they work for).

People tend to glaze over a bit when they start reading corporate messages. Especially those from executive leaders. According to the most recent Edelman Trust Barometer, only 46 percent of participants trust CEOs. Meanwhile, 52 percent trust employees of that same company.

What’s more, another recent report by PRWeek found that an alarming 69 percent of participants did NOT trust PR professionals. Only 12 percent said they did.

So, we have a public that increasingly does not trust CEOs.

A public that also may not trust PR folks to communicate company messages.

And, a public that we know, thanks to numerous surveys over the last few years, DOES trust people like themselves.

Given all that, doesn’t allowing employees to speak on behalf of brands during times of trouble make just a little sense?

I’m just saying, I think there’ something here. How can we empower employees to tell their stories during times of trouble in a way that will align with company messages? The platforms and tools are clearly available. And, as we’ve seen recently, people are more than willing to defend and talk about their companies.