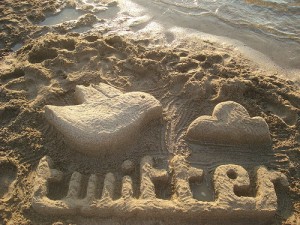 Today’s guest post comes from Tom Pick, a marketing consultant based right here in the Twin Cities. Sadly, Tom and I have never met face-to-face. We live in the same damn town and we talk more on Twitter than we do in real life–how’s that for “social” media? 😉 I’m sure we’ll rectify that soon, but for now, I wanted to let Tom have the stage today. Oh, and if you don’t read Tom’s blog right, go check it out at Webbiquity–just had a post a couple week’s ago on the top 50 women on Twitter.

Most Twitter users go through a similar cycle: from viewing it as inane, to starting to get it, to the “lightbulb moment” to quasi-addiction (or more than quasi in some cases). For a service so simple—people with some modicum of tech savvy and some level of common interests sharing 140-character bursts of insight, news or links—the intricacies of Twitter mastery can be maddening.

To help those who’ve figured out that Twitter does indeed have value but still struggle with how to maximize it, here are seven common misconceptions in need of correction.

Myth 1: The torrent of information is overwhelming. How can anyone possible absorb all of this?

Truth: That belief isn’t technically a myth, but it is thinking about Twitter the wrong way. Twitter—at least once you get beyond a relatively modest number of followers—isn’t like a drinking fountain, where you need to capture every drop lest you are wasteful. It’s more like a creek (or stream, or river, or really big river, depending on how many people you follow); you dip your cup of attention into the flow of knowledge from time to time and drink your fill, but let the rest flow downstream. If there are a few people whose musings you really don’t want to miss, create separate tabs for them in a dashboard like HootSuite or TweetDeck, or add them to a Twitter list.

Now, unless you’re a celebrity, you should check every direct message (DM) and @ message directed to you, and respond to those requiring it, but these will be far less than everything in your stream.

Truth: In the vast majority of cases—no. Twitter can drive direct sales in a few very specific circumstances such as a restaurant tweeting about lunch specials to a local audience at around 11:00 a.m. But for most businesses, Twitter is most suitable as an engagement and information-sharing platform. Trying to use it in a direct marketing or hard-sell manner is far more likely to cost you followers than to gain you leads or sales.

Truth: People who talk only about themselves are boring; that’s equally true on Twitter as in real life.

To grow and maintain a worthwhile Twitter following, you need to be interesting and engaging. Tweeting (selectively, of course) and retweeting content produced by others accomplishes both goals. It enables you to share a much larger volume of interesting content than you possible produce on your own, and it helps build relationships with those whose content you regularly share.

Truth: Generally speaking, no. Assuming you have prospective buyers following you on Twitter, think about where most of them likely are in their buying cycle relative to your product or service. Typically, Twitter followers are learning about solutions and vendors, at least in the b2b realm. The platform enables you to provide differentiating thought leadership type content (e.g., how-to articles) that demonstrates your company’s expertise.  It’s not a good place to flout brochures and product sheets (see myth #2 above).

The exception to this is if a prospect directly asks you for this type of information through Twitter. In that case, by all means DM them a link. But don’t assume your entire following wants to see your case studies, brochures and the like. These materials are most valuable later in the sales cycle, at which point you are likely communicating with the prospect through other channels, such as email.

Truth: While in real-life social situations it’s rude to ignore someone who’s trying to get your attention, it’s different on Twitter. There is no requirement, etiquette-related or otherwise, that you follow all of your followers.

If you spend a long enough time active on Twitter, you will inevitably be followed by some number of spammers, hucksters, bots and just plain oddballs. Make your decision on whether or not to follow other accounts based on their relevance and value to you. Are their Tweets interesting? Can you imagine yourself retweeting some of that person’s content? Does it seem likely they may retweet you at some point? Is this someone you may do business with at some point, either as a buyer, seller or partner? If you can’t answer “yes” to any of these questions, there’s no need to add more to your Tweet stream.

Myth 6: Success on Twitter is all about how many followers I have.

Truth: Success is about engagement, not followers. There are many ways to artificially inflate follower count without really achieving much benefit. One strategy is to build large lists of Twitters using Twitter directories; following the first 2,000 names; unfollowing (24 hours or so later) any of those Twitterers who didn’t follow back; then repeating with the next 2,000 names on the list.

Sure, you’ll be able to brag about having a huge follower count, but is this useful?

Far more effective is selectively following people you find interesting, discovered through directories or Twitter search. Then follow the people those Twitterers recommend. Then interact, and share useful and relevant information. Your Twitter following will grow organically from there. You’ll never pass Oprah this way, but you’ll have an engaged group of followers than can actually help you accomplish business goals.

Myth 7: To be more efficient, I should automate as much of my Twitter activity as possible.

Truth: Unless you’re CNN, no one cares about your broadcasts. The point of social media is to be social—interact. You can’t automate a real-life conversation with a customer, prospect, partner or industry influencer; it’s no different just because the interaction is online.

To be fair, you can automate certain tasks (e.g., automatically submitting a new blog post to your various social media accounts using a tool like HootSuite), but be careful not to let automation substitute for engagement. And whatever you do, do NOT automatically DM every new follower with some spammy welcome message; that’s a great way to annoy people and lose followers quickly.

There you have it. Mythology belongs in books and on movie screens, not in your social media activity. Social media doesn’t have to be difficult—but it does have to be real.

Tom Pick is an online marketing executive with KC Associates, a Minneapolis-based marketing and PR firm focused on B2B technology clients. He’s also the award-winning writer of the Webbiquity blog, which focuses on B2B lead generation and Web presence optimization.