Some may not know this about me, but I’m a HUGE donut geek. I may be skinny (weighing in at 170 lbs), but I’m addicted to my donuts and coffee. I’ve cut back lately, but I still enjoy a good donut.

And I live at the epicenter of the donut universe in Minnesota. I’m less than 2 miles from two of the better donuteateries in the Twin Cities in Mel-O-Glaze and Baker’s Wife–both tremendous.

But, there’s a new donut shop that just opened in near my ‘hood–Bogart’s Doughnuts. 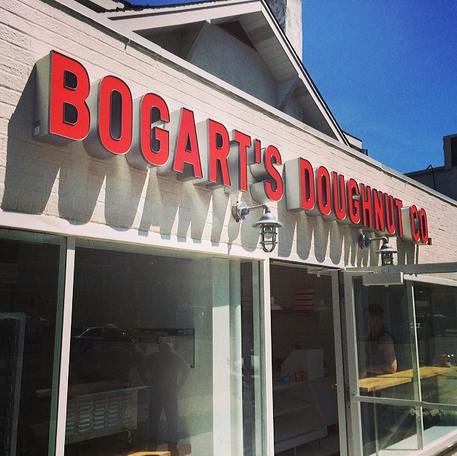 A little geekier than my favorite haunts, but this place have some serious donut geek-cred to it.

The owner, Anne Rucker, sold donuts at the Kingfield Farmer’s Market for the last couple years. If you haven’t had her brioche donuts yet, you simply have not lived.

Anyway, Anne Rucker opened up Bogart’s after months of great anticipation in South Minneapolis. After all, this place had a serious following. And, that was confirmed when Bogart’s opened last week to crazy lines and rumors of donuts selling out by 9 am! 9 am!!!!!

A week in, and I’d be willing to bet Anne would consider this launch a success so far–although, she does have a ways to go.   It’s been interesting to follow along with her marketing efforts too, as a small business owner. I’m always curious to see how smaller operations handle online marketing and PR–especially with strapped resources.

But Bogart’s has been interesting to watch–for a number of reasons. Some of which Anne has nailed–and others, well, I’ll just offer up some free, unsolicited advice (in hopes of exchanging those for free donuts down the road! 🙂

Here are 7 online marketing lessons to be learned from the Bogart’s Doughnuts grand opening this past week:

When it comes to small businesses and the web, the easier and simpler the better. Not just for customers (that’s a no brainer), but for the business owner as well. That’s why I was happy to see Bogart’s went with a very simple and mobile-friendly design. Just four items in the top nav–The Shop, Doughnuts, About and Order (although this function is not available just yet). Kudos to friend and colleague Katrina Wollet for the help with the design.

Show gratitude–and get personal with your customers

Anne posted the following note on Wed. of this week: 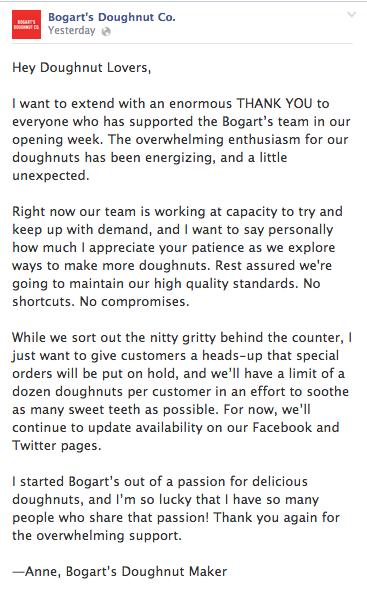 Just a wonderful message on so many fronts: 1) She shows gratitude right off the bat–she knows she doesn’t exist without loyal customers. Gold star. 2) In the second graf, she addresses the super-high demand–with a reasonable and very fair response. 3) Telling customers exactly how they’ll communicate about donut availability down the road–very smart. Again, she knows her customer base is digitally-savvy and is checking Facebook for updates. 4) More gratitude at the close, along with a promise to keep her standards and to stay true to her mission–what everyone wants to hear from a small business owner! What’s more, look at the comments she got on the post: 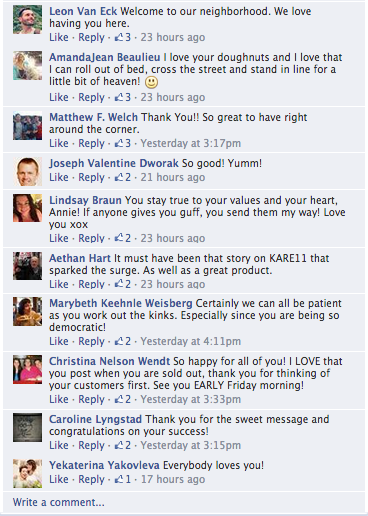 Real heart-felt messages from people right in the community. Messages of support and patience as they work out the kinks. Anne has EARNED these comments with her hard work–and her attention to detail in her marketing/communications approach to her business.

Rumor has been the first week that there has been LINES for these donuts in the mornings. So, Bogart is certainly doing its job to create buzz and demand. Job well done there. But, that’s just the first step. What Anne did that I thought was simple–but brilliant–was she SHOWED the demand by taking this pic earlier this week. It’s not enough to simply create the demand–you can create even MORE demand by showing it. Just think what people thought when they saw this pic on Facebook: 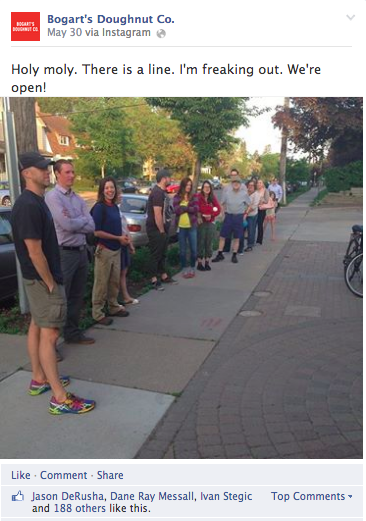 I’ll tell you what people thought when they saw this–they thought, “Damn, those must be damn good donuts–I better get down there and try one!” 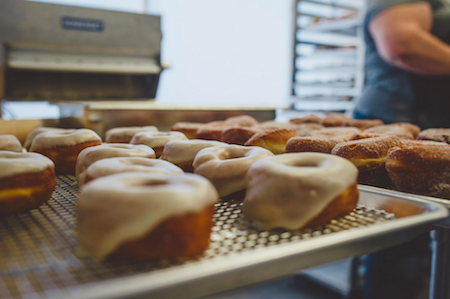 Yeah, I know she has them all over her web site and Facebook–but Anne’s not using her hero shot as much as you’d think. Of the 13 posts she’s made on Facebook since she opened, only 3 included the lovely doughnuts. That’s not enough. I would include a doughnut with almost every post she makes. For example, Anne does a great job of letting people know she’s sold out via Facebook–why not have a little fun with that? Maybe that post is really: “Just ONE left!” With a shot of a lonely, but lovely, donut on her counter. I just think if she’s selling these tremendous doughnuts, you have to feature them in photos much more than 3 out of 13 posts.

This one might be a stretch for a solo business owner, but I think someone like Anne could have some fun with Instagram video here. Why not create a short, 15-second video that features 15 different people taking a bit, delicious bite of her donuts? Each frame would be a different person taking a bite under the bite was complete. Again, might be a stretch, but also easier than you think using simply your phone. With short-form video really exploding (specifically across Twitter and Facebook lately), I could see this as an easy opportunity for Anne to create a few pieces of compelling content a month.

Take customers on your journey with you through pre-opening visuals

Another smart thing Anne did leading up to her launch last week: She took her loyal customers on her journey of starting a donut store in Minneapolis with her by posting pics on FB that told that story along the way. First, she made the ultimate tease: 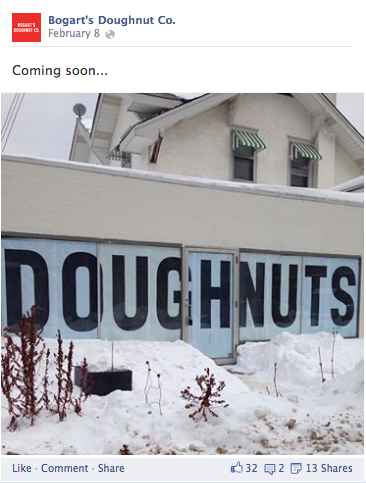 Then, she posted a series of pics that helped bring us all along in her journey to starting this business, including this adorable photo of who I can only guess is her daughter inside the shop: 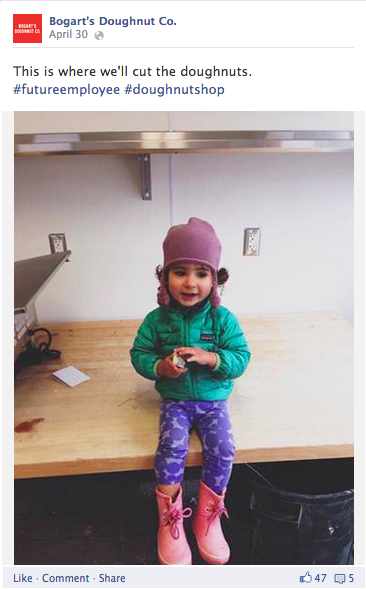 Anne even did a three-part series with local publication, Minnesota Monthly, on how she opened the store, which I’m sure isn’t hurting sales so far 🙂

The lifeblood of any restaurant or bakery: The Yelp review. And here’s an area of opportunity for Anne. Why? Because right now she’s getting a 3-star rating on Yelp (with completely mixed reviews–mostly due to the line and lack of supply). I know it’s early, but I’d have a plan in place for helping facilitate more of those positive reviews–because they ARE out there. No question. I mean, just look at her Facebook page: 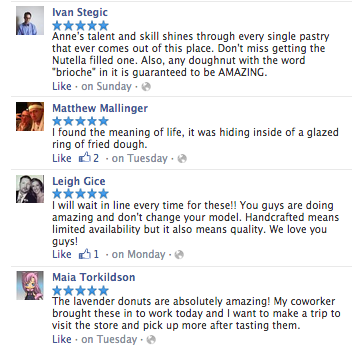 11 reviews and 11 FIVE-STAR reviews. Those are great, but they don’t help as much as the Yelp reviews do. Why not simply ASK your biggest customers (in this case, almost everyone that’s following you on FB) to go over and leave a similar Yelp review? Maybe just a small sign on the counter? Something that would gently encourage your biggest fans to leave more positive reviews. The fact that Bogarts only has five Yelp reviews right now is also an issue. I’d like to see that number go up a bit, if I’m the owner.