7 Life Lessons and Professional Pointers You can Learn from Twitter 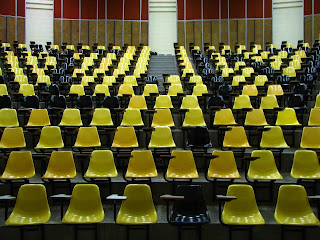 I’ll admit, I’m a relative rookie when it comes to Twitter. I just started really participating and engaging a few weeks ago. But, in that short amount of time, I feel like I’ve learned as much or more than I have during entire college courses. Or, even some of my post-grad classes for that matter. Hey, Chris Brogan said it best–maybe you don’t have to go back to school to hone certain key skills you need for your dream job today.

Since my primary MO is sharing, collaborating and connecting on- and off-line, I thought I’d share with you the life lessons and professional practices you can learn–as I have this last month–by engaging with others using this tool:
1–Twitter will make you a better writer. Writing in 140-word chunks forces you to communicate more efficiently and effectively. It makes you a great headline writer, which is only going to become more important as brevity is stressed more and more in the online–and offline–communications world. Twitter also forces you to write interesting, engaging copy–you know the kind you should be writing for your clients and organizations? If your tweets aren’t engaging and interesting, people simply won’t read them and engage with you. Wow, seems like I’ve heard that before somewhere…
2–Connect and collaborate with today’s great minds. You would be so lucky to have the opportunity to collaborate and learn from great minds like Chris Brogan, Shel Holtz, Jason Falls and Geoff Livingston. And those are just a few of the luminaries in the social media/communications industry. What about finance? Or, health care? Or, technology? They’re out there folks. On Twitter, you can connect with these thought leaders instantly in 140 characters. Believe me, these people are more approachable and open to conversation than you might think. Try them.
3–Be a sponge. A big, fat, ready-to-take on the world, kinda sponge. Soak in information as fast as you can take it in. I participated in Sarah Evans’ remarkable and wildly successful Journcat last night. With a non-stop stream of tweets running by at warp speed, it was tough to keep up. But, I tried to gather and learn what I could, connect with a few folks, throw in my two cents and move on (One of my lame tweets even landed on her “Top Tweets” list–Sarah, I’m blushing now…) Always remember: Do more listening and learning and less shouting and preaching and you’ll do fine.
4–Twitter can make you a happier person. Yes, psychology majors, you read that right. OK, so I may be over-stating it a little, but I find myself laughing at many tweets throughout the day. Just follow @ambercadabra, @darthvader or @skydiver for a while–you’ll laugh. Trust me. Doesn’t laughing make you happier? I’ve also met a boatload of people from everywhere from New Hampshire to Australia to Utah on Twitter. Doesn’t connecting with new people and building those relationships make you happy? Or, use Twitter to help others. Just look what @armano did last night on Twitter–helped raise more than 4K in two hours (running total is now around 11K, I hear) for a family in desperate need. Amazing.
5–Twitter will help you hone your “pitch” skills. If you’re in the media relations game, you know what I mean. When you pitch a reporter or blogger on a story idea you have to do a little research before crafting your pitch, right? You need to find out what makes the reporter tick. What he or she writes about. What they’re interested in. Twitter’s the same way. Before connecting with others on Twitter, take a few minutes to review their profile and read their blog. Find out where they went to school and if they have any special interests. Mention some of those things in your tweet. It’s the same skills–different arena. One more thing: reporters appreciate it when you send them a personal note after they’ve written a great story, right? Again, same principle holds true in Twitterville. Retweet a follower’s recent post. Or, just send them a nice tweet saying how much you’ve enjoyed connecting with them. Makes all the difference in the world.
6–Twitter: The new post-grad degree. Of course, it’s not all about Twitter. It’s about the conversations you have, the connections you build, the stories you share. It’s also about what you put into it–blog posts you write, comments you provide on other blogs, videos and podcasts you develop. Think you can learn all that in a classroom right now and in the next six months to a year? I’m not saying post-secondary education isn’t useful or a smart thing to do. I’m just saying tools like Twitter now give YOU the keys to your future. Take it. Run with it. You might like where you go.
7–Be yourself on Twitter. Isn’t that the first rule of dating? C’mon ladies, help me out here. I know it’s been a while since I’ve been in the dating game, but I’ve always followed this mantra. Applies on Twitter, too. Be funny. Smart. Irreverent. Whatever. Just be who you are. People see right through the folks who are trying to be someone they’re not–just like in the real world.
OK–your turn. What have you learned on Twitter? Any life lessons or professional tips you’d like to share?