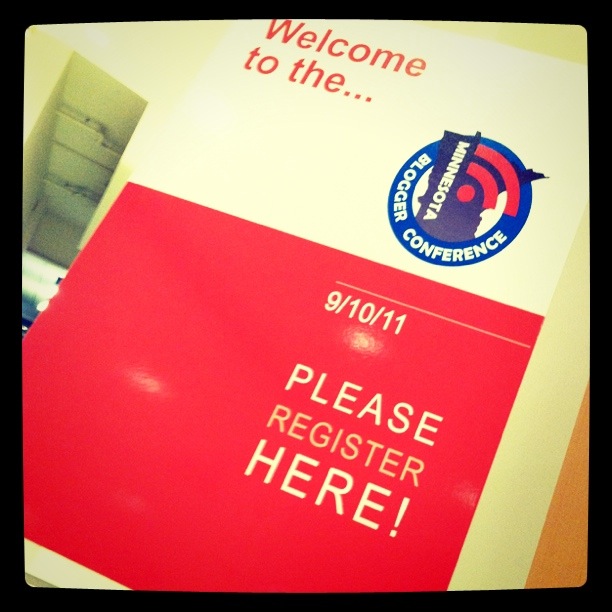 As those in Minnesota probably know, we held the second annual Minnesota Blogger Conference last Saturday at the Allina Commons in Minneapolis. More than 150 (not an official count yet) bloggers descended on the wonderful Allina campus for 7 hours of blogging, learning and networking.

It was a blast. And, by most accounts, people came away happy they took a Saturday to hang with and learn from their fellow bloggers.

But the best part about Saturday wasn’t the event itself–it was all about the community around us.

Yes, in Minnesota we have one of the most vibrant, creative and underrated blogging communities in the country. And, I’m damn proud to be a part of that mix.

Mandy Dwyer was one of our presenters. She talked about using photos in your blogs. Didn’t sit in the session, but heard great things. Mandy also volunteered her time–in something she gets paid real money to do every day–to help the MN Blogger Conference support our charity of choice for our event. So, that’s 7 hours total of Mandy’s time she basically donated to the Conference–and a good cause. And she was hardly alone. The conference committee (co-founder, Missy Berggren, Beth Gabor, Bridget Monroe, Suzi Magill and Josh Braaten–see photo above) also donated their valuable time. And lots of it. I could go on. We’re givers. And I love that.

We have superstars. Everywhere.

I have to admit–the list of speakers we had this year was pretty darn impressive. From our keynote Lee Odden to folks like Erica Mayer, Kate Hopper, Patrick Rhone, Jen Emmert, Meghan Wilker and Julio Ojeda-Zapata. It was a diverse list of folks who have expertise in all the areas that make blogging so interesting. I mean, these folks have serious talent. Erica’s a four-time Promax award winner and a Emmy-award winning director. Kate’s writing has appeared in the New York Times. And Patrick Rhone’s Minimal Mac is one of the most well-read Tumblr Mac blogs in the country. And, Julio, well the guy has a handful of blogs he keeps up–not to mention writing a popular tech column for the St. Paul Pioneer Press. What about Jen Emmert? She’s started a thriving community around weight loss. Meghan Wilker? One of founders of the popular #summerofdresses blog. I could go on and on…

We’re not too big for our own britches

This year’s keynote Lee Odden. If you don’t know Lee, he’s a pretty successful businessman–and blogger. And, he speaks across the world. And gets paid hansomely to do it (I’m guessing). But, when we asked him to keynote the Conference, for free, he didn’t bat and eye. He was in. And, as usual, he brought the heat. His keynote was fantastic. I heard people raving afterward–especially about the rhyme 😉 My point? Lee’s one of the most well-respected and in-demand speakers on the PR/marketing circuit. He gets paid to speak professionally. Yet he donated his time–without so much as a pause. He could have snubbed us. He could have pulled the “Don’t you know I get paid to speak?” card. But he didn’t. Because he’s from Minnesota. And that’s just how we roll here 🙂

I mean, any time you walk in a session and their are multiple figurines on the lectern, you know you’re at a blogger conference. But, that’s exactly what you saw when you entered the room for Julio Ojeda-Zapata’s mobile blogging session. Mykl Roventine’s session on WordPress plug-ins was full of language like “php files”, “themes” and “configurations.” Yet, it was completely normal. And people were asking all sorts of questions. Geek is the new chic, right?

I worked on the corporate side for half my career before going the solo route. One thing you tend to see in that environment is this “information hoarding” mentality. Nothing is worse than working in a team where people hoard information. So, when I started blogging four years ago and realized there are people that aspire and want to SHARE information and give freely, I embraced it with open arms. And, that’s a big reason I put my time into the Blogger Conference (as well as HAPPO, for that matter). And, it’s a big reason I love the local blogging scene–it’s FULL of people who give back and share religiously. Just look at the lineup: Lee’s blog routinely shares tips and best practices–he’s basically educating his competition. Mykl spent a ton of time the last few year’s helping organize our local Social Media Breakfast. And Mandy gave up essentially her entire Saturday to take pics at the event.

What about you? If you attended Saturday’s MN Blogger Conference, what impressed you the most about our local blogging community?