Three years ago, I started the PR Reader’s Choice Blog Awards. At the time, PR blogs were really just starting out. I mean, there were a ton of them, but not quite the proliferation we see now. But the impetus was to give the readers a voice in who they think deserved the accolades–instead of letting publications and random folks do the choosing for us. 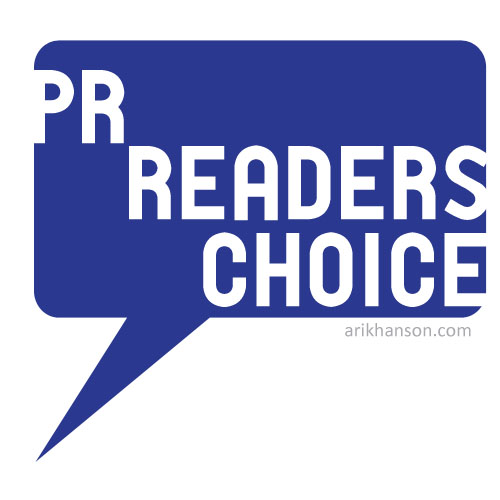 Over the last three years, a number of outstanding PR blogs have been nominated. The list is like a who’s who of PR blogs (and for good reason–it’s the Reader’s Choice Awards after all!). Blogs like Convince & Convert, Conversation Age, PR Squared and PR 2.0 (Brian Solis’ blog) have all been nominated.

Last year, our winners were:

Blog of the Year: Spin Sucks

This year, I’m excited to see some new entries in the fold. What’s been interesting in the last year or so is that many of the PR blogs I came up reading have either faded away (David Mullen’s blog–one of my early faves) or have gone the content curation route and broadened to other authors (like Jason Falls’ Social Media Explorer).

On the other side of that, there’s a whole host of new blogs that have popped up that continue to impress me. I’m thinking about blogs like Adam Vincenzini’s Comms Corner (although it’s not exactly new) and Jessica Malnik’s blog.

So, the first step is to nominate your favorites. We’ll have the same categories as the first three years:

* Blog of the Year

Please nominate your favorites ONCE in each category in the comments below. The deadline is midnight on Friday, June 29. After that, we’ll tally the nominations and the top 5 in each category will be put to a public vote in early July.

Excited to see your nominations!