10 Breaking Bad quotes that sum up the Facebook IPO

Three weeks ago I made the mistake of starting to watch Breaking Bad on Netflix. I say “mistake” only because Breaking Bad may be one of the most addicting shows I’ve ever watched on TV. Not in a cliffhanger, “I have to watch the next episode right now” kinda way. The show’s just really freaking good. 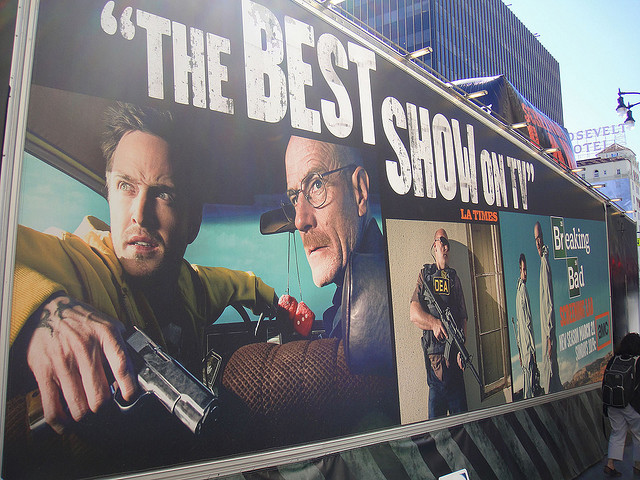 Now, I’m just starting season four on iTunes (bought for $34 since it’s not on Netflix yet) and eagerly awaiting season five this summer–although I’m not sure how I’m going to watch it. Probably on iTunes again.

Beyond Breaking Bad being just about the best thing on TV right now, it’s full of great–and often hysterical–quotes. And, as I started looking through them, a few reminded me of what’s been happening of late with the Facebook IPO. Yep, I just made that connection. Meth manufacturer and Facebook.

Here’s 10 of my favorite Breaking Bad quotes (so far) and how they sum up the recent Facebook IPO:

IPOs are certainly not about half measures. All in. No question.

Nah, come on man. Some straight like you, giant stick up his ass at like what, sixty, he’s just gonna break bad?–Jesse

This quote has a lot to with what happened to Zuckerberg at Harvard. Here’s a guy who’s at Harvard. He’s on track to a successful life. He then gives that up to pursue an online site and leaves Harvard entirely. Not exactly breaking bad, in the sense that Walter does on the show, but it wasn’t exactly the traditional path now, was it?

This one’s really for all those naysayers. Those doubters who said Zuckerberg couldn’t do it. Forget creating a successful publicly-traded company, I’m talking about those who doubted he could create a network that would attract users. Zuckerberg may not know shit about slangin dope, but he sure as hell knows a whole helluva a lot about building a social network.

You are a wealthy man now. One must learn to be rich. To be poor, anyone can manage.–Gus

I think this one speaks for itself. Mr. Zuckerberg must learn to be rich (you could argue he already was rich, but now we’re talking obscene money, obviously). Will he be a philanthropist with all that money? Will he buy 25 different homes? A 200-foot yacht in the Mediterrean? An island or two in the Caribbean? Time will tell…

If you’re committed enough, you can make any story work. I once told a woman I was Kevin Costner, and it worked because I believed it.–Saul

One thing about Zuckerberg–he can be a little stubborn. Yeah, he listens to his users. But, he also tends to think he knows best. Think about the privacy issues. Sometimes, it seems like he just talks himself into his own story–and tunes out what others ares saying.

Look, I like making cherry product, but let’s keep it real, alright? We make poison for people who don’t care. We probably have the most unpicky customers in the world.–Jesse

OK, so 900 million people aren’t using meth, but doesn’t this one sum it up? I know Facebook has been transformative in some ways, but let’s be honest. For most of those 900 million, Facebook’s an ideal diversion during an an otherwise dull workday or life. And, remember all those changes Facebook made that people complained about? They kept using the product anyway, didn’t they? Jesse. Mark Zuckerberg. I think they basically think the same way, don’t you?

Did you not plan for this contingency? I mean the Starship Enterprise had a self-destruct button. I’m just saying.–Saul

With stories breaking a mile a minute leading up the the IPO, I wonder: Did Zuckerberg and crew have a plan B? Did they have a contingency plan or two in their back pockets? I mean, if the Starship Enterprise had a plan B, I would hope Facebook would…

I couldn’t find a link for this quote, but I just had to include it. Maybe one of my favorite quotes of the series.

My wife is seven months pregnant with a baby we didn’t intend. My fifteen-year old son has cerebral palsy. I am an extremely overqualified high school chemistry teacher. When I can work, I make $43,700 per year. I have watched all of my colleagues and friends surpass me in every way imaginable. And within eighteen months, I will be dead. And you ask why I ran?–Walter

As shitty a hand as life dealt Walter, think about the hand life dealt Z. OK, so he didn’t grow up in a posh-and-tony neighborhood, but he didn’t exactly grow up destitute. Then, he attends Harvard. Founds Facebook. And now he’s a billionnaire by age 30. Kinda the opposite of Walter, right?

I am not in danger, I am the danger.–Walter

This one’s interesting because I think it applies to Z now. He’s the billion-dollar man now–officially. You don’t think that changes things? You don’t think that makes him a target for a whole lot of people? Think again. Billionnaires  can be very dangerous people. Next two years will tell a lot.